In any big city, no matter how long you have lived there, every once in awhile you'll come across something new. That experience happened to me recently when I discovered Sendai Kouren Honpo. It is a specialty store which makes and sells its own hand-roasted senbei crackers. Located downtown just a few minutes' walk from Kotodai Park, the location is perfect for a quick snack on the go or to pick up a tasty treat for someone.

Unknown to me until a bit of detective work, this style of senbei crackers actually have a long history around this part of Miyagi Prefecture. Over 600 years ago in nearby Matsushima's Zuigan-ji Temple, the technique to make these crackers was created. Since that time, its skill and tradition has been protected and passed down through various people and businesses for generations. Sendai Kouren Honpo was constructed after WWII during the rebuilding of Sendai. Around the same time, gyutan, grilled beef tongue, took over Sendai's culinary world by storm. Probably because of that reason, you won't find this traditional snack featured on tourist brochures and many locals may not even be aware of this snack or the store. What a pity, because they are missing out on some of the best senbei in the capital of Tohoku.

Step inside the humble senbei store to the warm smile of staff greeting you at the counter. You can see a glimpse of the kitchen in the background where senbei is made, so if you arrive in the early hours you may be able to see it in action. I wasn't able to during my visit. No problem though, as I had plenty for my eyes to feast on (before my stomach did). The display counter has the five flavors of senbei sold at Sendai Kouren Honpo: soy sauce, sugar, sesame seed, Aojizo (green perilla), and nori​ seaweed. Being handmade, the senbei are slightly different sizes. For that reason, crackers are sold by weight, resulting in one cracker costing between 30-55 yen. I recommend a bag of various crackers to try all the flavors for just 500 yen. In a glass case to the left of the entrance are gift boxes which sell the delicious, traditional snack in large quantities wrapped up nice and ready to please.

With its downtown location, exceptional taste, and traditional flair, there are a number of reasons to visit Sendai Kouren Honpo. What are you waiting for? 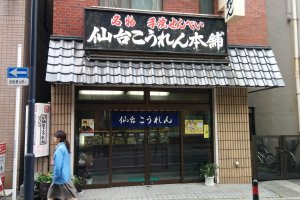 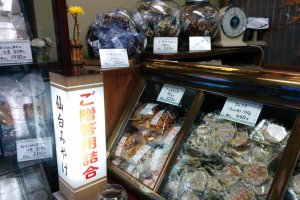 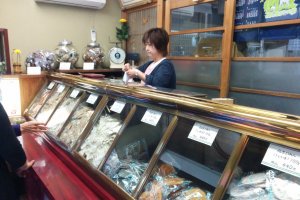 Justin Velgus Author 6 years ago
Thanks for those extra details! Yes, I was surprised to find it, but apparently you already know about this great place. I am going to be stopping by regularly when in the area from now on.
Reply Show all 0 replies

Yuri Sasano 6 years ago
Hi Justin, I love this crispy senbei,:D The crackers were named after the Buddhist nun 'Koren (紅蓮)'. She was a Zen Buddhist nun at Matsushima Zuiganji Temple over 600 years ago. Koren baked rice crackers by herself and offered it to the people in a village. As you mentioned, Matsushima Koren senbei is probably a original brand. Nun Koren was also a heroine of tragic love story though, crackers with the savory flavors are enjoyable treats for everyone !
Reply Show all 0 replies
2 comments in total