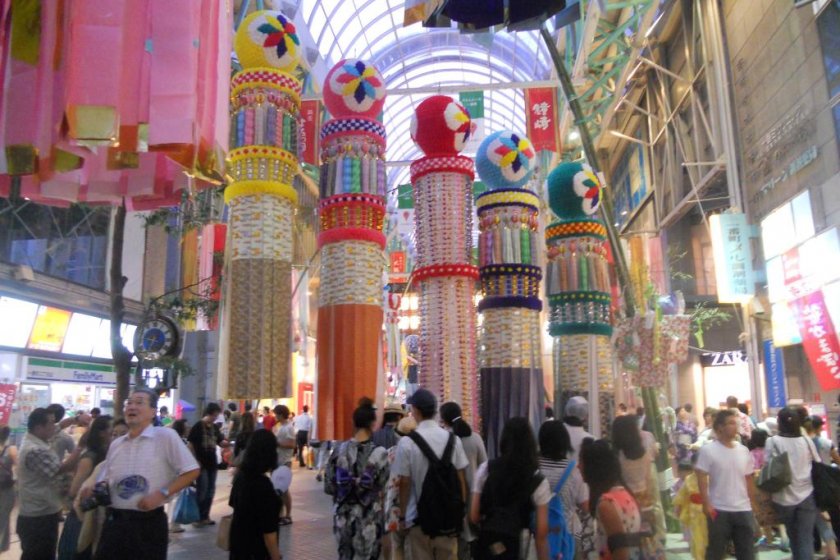 The myth, the history and the culture

Before checking out Tanabata in Sendai, here is a brief summary about the myth, the customs and the history behind one of the largest summer festivals in Tohoku.

The festival celebrates the meeting of Orihime (weaving princess in Japanese) and Hikoboshi (cow herding star), or Vega and Altair respectively.

According to the story, Orihime was a princess who weaved fine clothes for her father Tentei (the sky king) on the bank of the Amanogawa (the Milky Way). While her skill impresses her father, the princess longs to find love, so Tentei arranges for Orihime to meet Hikoboshi, a cow farmer from the other side of the river. After falling in love, Orihime stopped making any more clothes, and Hikoboshi let his cows run all over heaven. Furious, Tentei separates the two using the river, but when he sees his daughter become heartbroken, he strikes a bargain with the literal star-crossed lovers; if they do their duties as required, on the 7th day of the 7th month each year, he will allow them to see each other.

And on that day, a group of magpies shall use their wings to make a bridge for Orihime to cross over to see Hikoboshi. However, if it rains on the day of Tanabata festival the magpies will not come, leaving the two saddened lovers to wait until the following year to meet.

The History of Sendai Tanabata Festival

The city of Sendai began to celebrate this festival during the Edo Period (1603 - 1867) after its founding by samurai warlord Masamune Date.

The festival grew bigger and more popular over the years, but fell into decline during several transition periods in Japanese history including the Meiji Restoration and both World Wars. It was in 1928 in the wake of the economic depression that gripped Japan after WW1 that citizens began to celebrate the festival from August 6th through the 8th - a month later than the 'official' date. It was only later on when the festival began to be celebrated on the 5th rather than the 6th that a fireworks show was included to kick off the celebrations.

The most noticeable decoration you will find is the kushidama, which are large paper balls with long streamers. They were originally modeled after the dahila flower, but in recent years other forms such as boxes and paper characters have become more popular.

The streamers on a kushidama represent the strings Orihime uses to weave clothes for her father. You will also see other items hanging from these decorations, each of which represents a different blessing.

Paper strips with handwriting represent good luck in studies. The paper kimono wards off accidents and ill health. The paper crane represents family safety, health and longevity. A purse represents good business. A net represents good fishing and harvests. The trash bag represents thriftiness and cleanliness. As I noted before, all of these decorations were made and donated from all across Japan.

Tanzuku are pieces of paper upon which wishes can be written. They can be written in Japanese or any other language informally, or in the more traditional poetic form.

After you finish, the wish is tied to a rack on a bamboo wish tree. They are usually burned on the final day of Tanabata or sent downstream, similar to scenes seen during the Japanese Obon Festival. 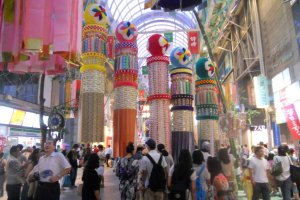 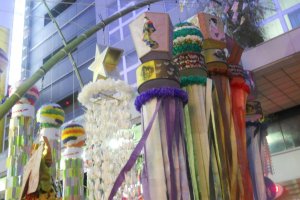 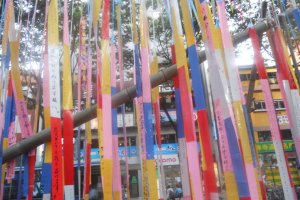 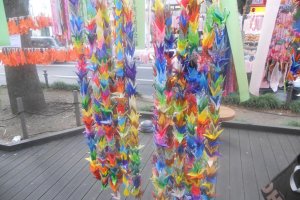 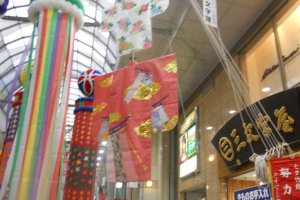 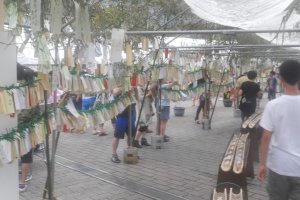