Pray for wealth while exploring the city

Seven has long been considered an auspicious number across cultures and throughout history. From seven days in a week, seven musical chords, to various mathematical expressions and linguistic phrases like "seventh heaven," meaning great joy, seven is important and instantly recognizable. Many people consider the number seven to be lucky, and this certainly encourages a pilgrimage to pray for wealth from Japan's Shichifukujin. The Shichifukujin are seven deities of fortunes, often translated as the Seven Lucky Gods in English. You can find them all across in Japan in art, enshrined in temples and shrines, and all around New Year when they are said to give out presents from their Treasure Ship.

The seven noteworthy deities are selected from Chinese, Indian, and Japanese history, religion, and folklore. Here are their names and associations:

​The city of Sendai has its own Seven Lucky Gods pilgrimage. Your first step would be to check out the official website. Even if you can't read Japanese, the map will provide approximate destination locations. Clicking on the names of the deities gets you contact info and an address. Locals should be able to point you in the right direction if you ask with a smile.

You have the freedom to choose your own route. I recommend starting in the south and work your way back towards the city center. You'll notice most places are within a ten minute walking distance from a subway station, so an all day subway pass or bus pass may be worthwhile. However, these options still require lots of transferring and a detailed schedule. The farthest temple from downtown is located on Yagiyama, so consider making a side trip to Yagiyama Zoo while in the area. I went by Date Bike, a rental bike service. It took about 6 hours traveling, taking in the temples, and stopping for a 30 minute lunch.

The Seven Lucky Gods are enshrined in temples. However, Ebisu, being the only deity of Japanese origin, is located in a shrine (on top of the Fujisaki Department store). The temples look like normal temples from the outside and most don't have any indication that in addition to a specific Buddhist deity, there is one of the Lucky Gods inside too. This is the key point. You need to go inside the main prayer hall to visit these gods of fortune. This is perfectly fine and you are more than welcome, though you may have to ask staff or a priest to be let in. A simple "Hondo kudasai" (Main prayer hall, please) should get the point across. You can also mention Shichijifukujin if you are still not understood. Admission outside and inside is free.

Inside these temples are statues and objects related to that specific enshrined deity. This is usually located right next to the more elaborate Buddhism praying area. However, most of the time these are empty of visitors so you can relax and taking pictures is generally okay. You should place a monetary offering in the box (any amount is fine). Then put your hands together and close your eyes for a moment in front of the statue of the deity to pray for riches. There are stamp phamplets you can pick up free of charge at most of the locations. Stamp the designated spot on the pamphlet when visiting the correct place for an instant souvenir.

The Sendai version of the Lucky Gods Pilgrimage takes a long time, but tt is a great way to explore the city and see a lot of great Buddhist art and architecture at the various temples. Time will tell if your prayers for good luck and financial success pays off. You won't know until you try.

Looking for another even more challenging pilgrimage in the capital of Tohoku? Check out the 33 Kannon Temples. 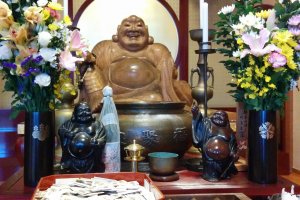 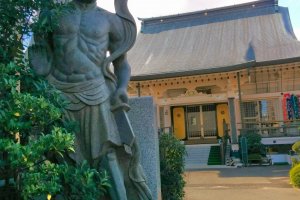 Justin Velgus Author 5 years ago
For those with energy and time, I did this route by electric-assist Date Bike in about 6 and a half hours. Those that go at a faster pace and don't explore all the details or stop for lunch can maybe get it down to about 5 hours. https://en.japantravel.com/miyagi/date-bike-rental-service-in-sendai/23650
Reply Show all 0 replies
1 comment in total