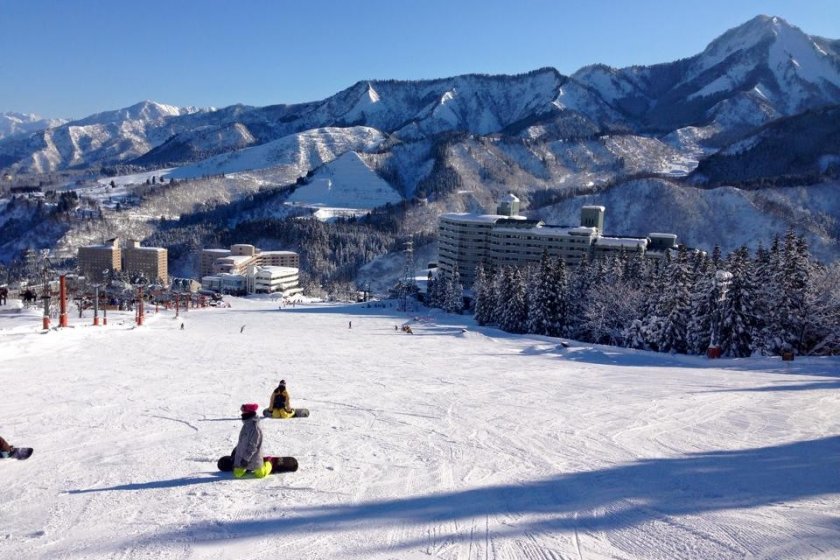 A view of the apartments from the 'bunny' slope. So close a six year old could hit them with a snowball.

I live in Tokyo and have just returned from a New Year's skiing trip in Japan. I spent 75 minutes on the Shinkansen getting from Tokyo to the accommodation and the accommodation was ski-in, ski-out. Just think about that for a moment. An hour and a quarter and you are on the slopes with an apartment that overlooks the largest night ski area in Japan. I am English and have lived in both London and New York and if you had told me that you could get from a major metropolitan capital city to a ski slope in just over one hour, I would most likely have believed that you had found a wardrobe and were booting up for a tip to Narnia. But you can, and there is no sign of Mr Tumnus.

Many skiers have known about Gala and its link over to Ishiuchi Maruyama for a long time, and they might have even known about the Twin Towers Apartment Complex that stands at the foot of the 'bunny' slope. But I would venture that few have ever stayed in the area, as the ryokans (Japanese Inns) are few and far between, typically not great value for money and with no self catering services. So the area has remained something of a day tripper's paradise or an undiscovered gem. But no longer if Twin Twips have anything to do with it.

Twin Tips have just released their first tranche of apartments in the Twin Towers apartment complex in Ishiuchi, Niigata Prefecture. Check out their website or Facebook page to see full details but there is a range to suit all tastes. I have two daughters under ten, so as a family we stayed in a decently sized one bedroom apartment that had all you'd expect from a European self catering holiday: fridge freezer, washing machine, shower/bath, cooking facilities, dining table and separate sitting area with TV and DVD. With a family of four we could have chosen a local ryokan, and we have done so in the past, but the freedom of being able to cook family meals and wash our ski clothes was a huge plus.

The convenience cannot be overstated. It is a universal truth known by all parents that now days the cold hands of a six year old are more important than any amount of backcountry fresh tracks. But this year there were even times I'd settle her in before nipping out to do a few extra runs in the powder along the edge of the slopes whilst she watched.

This isn't a review about the skiing at Ishiuchi Maruyama​, everyone who goes already knows that Japan is the best skiing in the world. But it is worth mentioning two things: First, the mountain is significantly lower than Gala and all other hills local to Tokyo, and as a result it is significantly warmer, and second, is that despite the warmer temperatures, the snow is quite frankly ridiculous. As you step out onto the 'bunny' slope from the apartment complex, it is barely even freezing, perhaps one degree below yet; whilst I was there any planned or un-planned venture off-piste had me knee deep in the famous Japanese powder. The reason I mention these two things is for those readers who are keen skiers but now have families of their own. Our six year old gets cold very easily and last year's trip to Niseko was a bit of a disaster as it was far too cold for her, which resulted in a lot of sitting around time - but this trip she loved. She was much warmer, skied for hours and whenever she felt even a little chilly she'd simply take off her skis and walk back to the restaurant in the apartment complex to grab a hot chocolate. The convenience cannot be overstated. It is a universal truth known by all parents that now days the cold hands of a six year old are more important than any amount of backcountry fresh tracks. But this year there were even times I'd settle her in before nipping out to do a few extra runs in the powder along the edge of the slopes whilst she watched.

What else can I say? Oh yes... the apartment complex has a fabulous onsen (hot spring bath), saunas, showers and a wonderful indoor heated swimming pool that has views out onto the slopes. One day I took my youngest daughter swimming and was able to watch from the warmth of the pool​ as my eldest daughter skied with her mum. There is also a karaoke bar, pool tables, table tennis tables and a basic kids play area. And we mustn't forget a lunch restaurant on site and another which opens in the evening should you get too tired to cook for yourself.

But nothing is perfect. I wouldn't recommend the area for those looking for serious apres ski action and currently there are no child care facilities, so families with very young children would need to share the child care or take help with them. But if you are keen skiers and have kids who are learning, then Twin Tips is something of a gold mine.

We will certainly be back. In fact we have already booked in our next visit. Hopefully see you on the slopes. 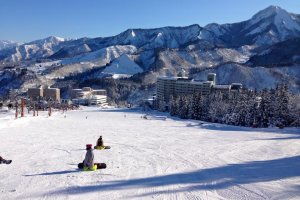 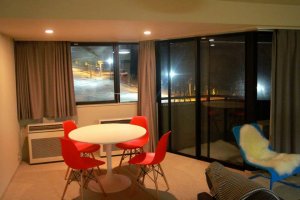 Kellie Fitzmaurice 7 years ago
I love this place. So do the kids. The building facilities are amazing, the accommodation is warm and clean, such easy access to the slopes and the restaurant on B1 serves wonderful, fresh and tasty food.
It was also a great base for discovery in the summer: Fuji rock, Kiyotsu gorge, Daigenta Canyon, Untoan temple and the fabulous Urasa park.
Reply Show all 0 replies

Rufus Starbuck 7 years ago
I have friends that use apartments in the Twin Towers as their base for the Fuji Rock Festival every year. They reckon it is cheap festival accommodation and much better than a hotel. Great value, and far less crowded in the onsen when trying to wash off the mud!
Reply Show all 0 replies

Nicole Bauer 7 years ago
Oh wow, this looks like the perfect combination of great snow and convenience! Thank you so much for sharing.
Reply Show all 0 replies
4 comments in total