Trendy Food for a Long Life

It has been said that food is the soul of a country. This couldn’t be truer for Okinawa. A mix of favorable natural conditions and diverse foreign influences produced unique eating habits and a cooking style that is now known as “Okinawan cuisine”.

The southernmost of Japan’s 47 prefectures, Okinawa is a chain of over 150 islands stretching out from the southern tip of Kyushu Island to close to Taiwan over a distance of 1,000 km in the South China Sea. A sub-tropical climate in most parts, ensuring temperatures of over 20 degrees throughout the year and high levels of rainfall, Okinawa boosts a rich ecosystem with a diverse flora and fauna.

From the 15th to the 19th century the islands became unified as the Ryukyu Kingdom, which had its own religion and language. The islanders traded with their neighbors in China, Southeast Asia and Japan, which made the Okinawan islands a melting pot of many traditions and culinary traits.

Invasions, war and occupation have ravaged the Okinawan Islands, and they have erased some of its culture and heritage, yet traditional Okinawan cuisine has not only survived but it is thriving.

In recent years there has been an increasing interest in Okinawan cooking on part of health-conscious Japanese and foreigners, including some celebrity chefs, and the international food community has just caught the rift.

The reason for this interest is the fact that the Okinawan way of cooking and eating is proven to be one of the main factors for the longevity of Okinawan people.

Where else in the world can you find more than 400 centenarians? To reach an age of 100 and even go beyond and be healthy in body, mind and spirit, is a rare gift well worth cooking for.

The abundance of sunshine and a high temperature all year-round ensure the growth of a good range of fruits and vegetables, many of which are different to those grown in other parts of Japan.

Traditional Okinawan cuisine maximizes the nutritious values of the locally sources ingredients. Rich in vitamins and minerals and low in calories, research found that Okinawan fruits and vegetables have many anti-aging and anti-oxidant agents.

Reason enough to make your way to Okinawa and check out the islands super-healthy ingredients at a local market in Naha City, followed by an Okinawa longevity cuisine cooking class at Yonner Food, located not far from the market.

There are also several restaurants that offer Okinawa longevity cuisine, for example Emi no Mise restaurant in Ogimi Village and Café Koko in Shoshi Village, both located in the far north of Okinawa’s main island.

A perfect introduction to Okinawa for the foodies among you, and all those who look for a healthy way of eating. 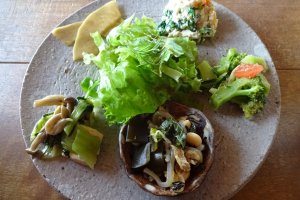 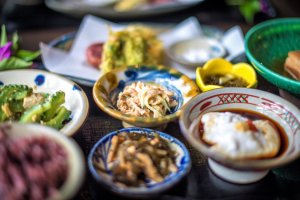 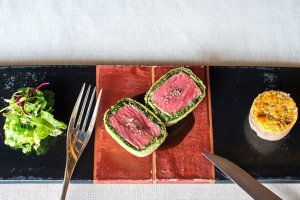 Sherilyn Siy 11 months ago
Okinawans have a way of preparing goya that removes the bitterness. I've never been able to master it though!
Reply Show all 0 replies

Sleiman Azizi 11 months ago
Longevity advice? Tell me people aren't going to be rushing to read this!
Reply Show all 0 replies

Kim 11 months ago
So much colorful food - purple sweet potatoes are my favorite!
Reply Show all 2 replies

Bonson Lam 11 months ago
Oh really! Amazing that something so rich in antioxidants can be so delicious, sweet or savoury!
Reply

Kim 11 months ago
We've actually used them to make soup, too! Definitely makes for some interesting presentation!
Reply

Bonson Lam 11 months ago
Thank you for introducing these unique Okinawan produce. Goya can be an acquired taste, especially for children, but its crunch and slightly bitter taste makes for a healthy contrast. I had many people asking me about the secrets of a long life in Okinawa and wanting to visit.
Reply Show all 0 replies
6 comments in total