Traditional chests of drawers, all hand-made

Some might also know that Kishiwada is a joka machi, an old castle town, where you can enjoy a visit to Kishiwada Castle and its fascinating rock garden, Hachijin-no-Niwa.

Or how about a stroll through Honmachi-no-machinami, the Old Town where you find preserved old merchant houses that stand along the old Kishu Kaido (Kishu Highway), a trade-route used during Japan’s feudal period that connected the Kishu Province (now Wakayama) with Osaka and Edo, present-day Tokyo. In Honmachi you will also find Kishiwada’s Confectionary Lane. Kishiwada’s wagashi (Japanese confectionary) are tasty and plentiful. You can sample your way through several shops in this lane.

Less known is the fact that Kishiwada and Haruki are also a traditional manufacturer of furniture, namely kiritansu. Kiritansu is the Japanese word for chest of drawers. Traditionally they were used for storing kimono and valuable objects. Kiritansu are essential furniture in a traditional Japanese household.

There are a number of areas in Japan that are famous for making kiritansu. One of them is in the south of Osaka, in the districts of Haruki and Kishiwada. This area is now part of Osaka Prefecture but during feudal times this area was called Senshu, or Izumi Province. This is why the chests of drawers produced here are called “Osaka Senshu Kiritansu”.

This area has a 300 year long history of manufacturing kiritansu. According to historical records, the chest of drawers gained in popularity amongst rich farmers in the Kinki area (now Osaka) during Japan’s Edo Period (1603-1868). They used them as bridal gifts for their daughters.

These chest of drawers developed over time from what was originally just wooden boxes in which the farmers stored valuables. Farming is seasonal and many farmers took up other work during off-season, for example carpentry. Out of this carpentry cottage industry developed the Kongo Kumi, a famous shrine carpenters’ guild. They build temples and shrines in the Osaka area.

In Kishiwada the kiritansu are made paulownia (kiri no ki in Japanese), a tree native to China but locally available in Japan. Its wood has a light color and an attractive grain. It is light in weight and it does not burn easily. This is very important in a country where buildings are constructed of wood and hence burn easily. Paulownia wood repels insects and it does not decay easily. In other words, it is the perfect wood for manufacturing furniture and boxes to store valuable items.

Solid paulownia boards are used for manufacturing the chests. It is a characteristic of the Kishiwada chests that their corners are rounded. These chests are masterpieces of traditional Japanese furniture making. To keep the beautiful look over the years these chests have to be handled carefully. For example, they are sensitive to direct sunlight and aircon air. It is even recommended to use the drawers only when wearing cotton gloves, and definitely never touch them with dirty or wet hands to avoid staining the beautiful surfaces of the chests.

Many years ago there were 350 workshops, typically family-based, in Kishiwada that produced Osaka Senshu Kiritansu but now there are only nine remaining families in this line of business. One of them is Hatsune no kagu.

A hand-crafted Osaka Senshu Kiritansu does not come cheap, with prices in the range of ¥1 million. However, if you are after a very special heirloom for next generation, then pay Kishiwada’s kiritansu showrooms a visit! 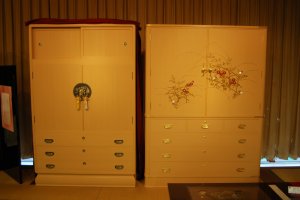 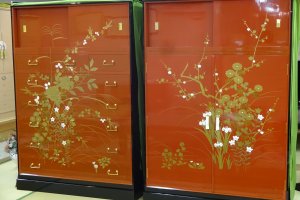 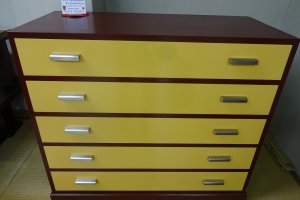 Bonson Lam 4 years ago
When I moved out of home I bought a century old antique tansu kimono chest. Being the masterpiece in the living room, it was a beautiful cherry brown stained five-drawer affair with Meiji period motifs on the hinges which stood the test of time. There was even a secret compartment to put all the accessories, like tabi ankle-high toe socks and folding fans. However when my wife tried to fit her modern day size kimonos in the drawers, we realized they weren’t wide enough to fit the kimonos properly. It made me think, what happened to all the other Meiji period tansu? Do people use tansu these days? And is there anyone left who makes tansu? Your beautiful story about the treasure chests in Haruki and Kishiwada brought back lots of beautiful memories. Thank you for this article Alena.
Reply Show all 0 replies
1 comment in total