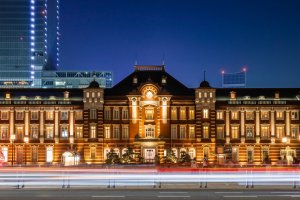 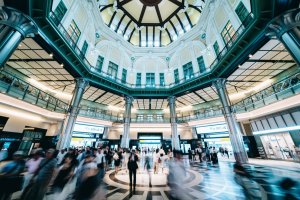 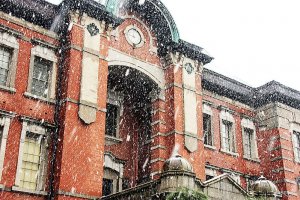 With over 3,000 trains passing through every day, Tokyo Station is the busiest station in Japan. It is the fifth-busiest in terms of passengers and even serves as a hub for many regional commuter lines and the Tokyo Metro network. The station covers so much area in fact that it is divided into the Marunouchi and Yaesu sides.

The red brick exterior has survived since its original opening in 1914 and has become a recognizable symbol of Tokyo itself. The plans for the elevated railway line were drawn up in 1889, and since it’s opening, Tokyo Station has seen much history pass by.

These two dome entrances on the west Marunouchi side feature part original plaster, reinforced and restored alongside relief work completed in the 2012 renovation. Also look out for the eight eagles underneath the dome, and eight Zodiac animals in the surrounding artwork.

Designed by architect Tatsuno Kingo, the brick exterior of Tokyo Station was a restrained celebration of the Russo-Japanese War’s costly victory. It has survived bombings from 1945 and seen the assassination of two Japanese prime ministers.

Tokyo Station is a main station on the Yamanote Line and easily reached from many lines. For the main brick exterior facade head for the Marunouchi Exit.

With it's newly refurbished iconic red brick building, Tokyo's rebuilt JR station could be argued to be the face of Tokyo..

Things to Do Near Tokyo Station

Tokyo Station, the main train terminal and also a major bus terminal, transporting people to other cities in Japan, is more than..

Getting to Know Tokyo Station

Tokyo Station, having just recently finished its exterior remodeling of its Marounuchi side, is the hub of most travel here in Tokyo...

Tokyo Station Celebrates 100 Years! To commemorate the 1914 opening, a series of festive events will take place and special li..

Tokyo Station at Night: One million busy people pass by and through this beautiful, dreamy station every day.

Tokyo Station's evening traffic action is a beautiful view and a time-lapse video of the same is as below.

The reconstruction of Tokyo Station is not just for its appearence, for the original style has much historical significance behind..

Tokyo Station is a train station in Marunouchi located just next to the Imperial Palace and Ginza.

Tokyo Okashi Land lives up to its namesake with several concept stores for Japanese confectioners and snack makers; such as Glico..

When you feel like you've had enough Tokyo's outdoors the indoor streets of Tokyo Station city will welcome you.

Do you love anime? Do you love Gundam, specifically? Do you like food that is dedicated to the aesthetic value of the appearan..

The best way to travel around Japan is using the JR rail system, and with the pass you can save a lot of money.

Soranoiro Nippon is one of the restaurants located at Tokyo Ramen Street (Tokyo Station). The restaurant serves up a variety of..

Tokyo International Forum is a multipurpose Tokyo exhibition center located in the central Marunouchi district of Tokyo. It is a convention and arts center..

The 2019 Rugby World Cup and the 2020 Olympic Games in Tokyo prompted the renaming of the building previously known as the 1000-day theater in Tokyo Sports..