And it's eco-friendly, too

It’s difficult to agree on which place in Tokyo has the best place for shopping—if there is anything you can do everywhere in Tokyo, it’s shop ‘til you drop. But when first I heard the words “largest shopping mall of Japan”, my fashion senses were tingling and I couldn’t hop on the train (the Musashino Line for Koshigaya-LakeTown Station, to be exact) any faster.

Saitama Prefecture, the location of the mall, is about an hour away from the center of Tokyo, but I would definitely deem the hike worth it. Once you disembark from the train, the first section of the mall you’ll come across is Kaze.

Kaze, noted with a water symbol, is made in a triangular shape and has a cinema, Maruetsu food supermarket and many apparel stores. “Many” is quite the understatement, as there are hundreds of stores to browse.

Mori, with a tree symbol, is a 500-meter strip to give shoppers the feeling of “strolling along a beautiful town street” with stores on either side to ogle at. Like Kaze, Mori has three floors to enhance your shopping experience. It also houses the AEON department store, where you can find anything from household goods to yukata, priced in the upper-moderate range.

The transitions from one mall to the other appear to be seamless, except that the LakeTown Outlet, marked with a green bulls eye, is open-air. You can enjoy a nice courtyard amongst the slightly discounted luxury-brand stores.

You’ll find that everything in the mall is kept up-to-date with the fashion world. I found so many choices with flowing skirts, platform shoes, floral prints and snapback hats (for men and women)—being in this mall made it seem like I’d never left home.

As far as the men’s fashion is concerned, I don’t think cropped pants have yet graced American stores, but the typically European fashion has made its way to the island nation. Additionally, button-down shirts are plentiful to satisfy anyone’s cravings for the classic.

My top two recommendations for Japanese-brand stores are Uniqlo and Wego, although I did see many recognizable stores such as Zara, Lacoste, Gap, Quiksilver, Fossil and even a Krispy Kreme (hey, it's not a clothing store, but I was excited to see it!).

And if you’ve still got shopping fever after a grand tour of this fantastic mall, there’s also a Forever 21 and H&M (amongst other stores) three stops down at the LaLaport shopping mall at the Shinmisato Station. 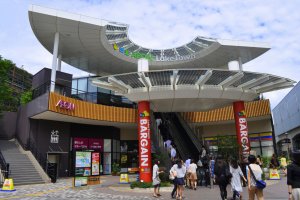 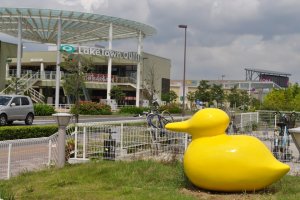 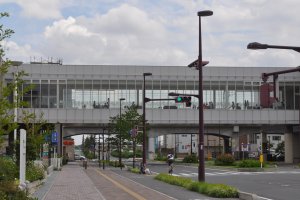