Immerse yourself in springtime beauty

If you're in Shiga during spring, one of the prefecture's best destinations for cherry blossoms is at Hokoen Park, built on the site of the former Nagahama Castle ruins. The grounds here are filled with around 600 Somei Yoshino sakura trees, and they have been designated as one of Japan's Top 100 cherry blossom viewing spots. If you want a unique vantage point out over the beautiful blooms, head up to the observation area at the Nagahama Castle Historical Museum to appreciate them from above.

Typically, the best time to catch the trees at their best here is from the early to mid April period.

Admission to the park area itself is free, but there is a fee of 410 yen if you want to enjoy the view from above at the Nagahama Castle Historical Museum.

Hokoen Park can be accessed in around eight minutes on foot from Nagahama Station, served by the JR Biwako Line. 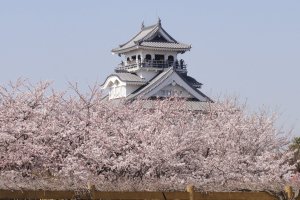