The Tsuwano Castle Ruins are located atop Shirayama hill, some 100 meters above the town. It is about 40 minutes on foot from Tsuwano Station, but the route to the castle leads through most of the scenic spots of the town. It is said that this castle is the second highest in Japan (after the Takeda Castle), and as a mountain-castle, offers beautiful views of the town and the surrounding countryside – especially in autumn with the changing color of the leaves.

Sadly only the stone foundation remain from the original castle structure, which was disassembled on order of the Meiji government, which feared an uprising of rural domain leaders.

The first fortification was built in 1295 by the Yoshimi clan, later extended in 1600 by the Sakazaki Clan (ruling from 1600 to 1616). At first it was merely earthworks, and smaller walls, and the stone foundations were added in the 17th century.

The demaru or external fort (north of the main fort) was built in 1324, with stone walls added during the 17th century strengthening works. The old tower (main tower) of the main keep burned down after a lighting struck it in 1680, but since the domain lord of Tsuwano (Kamei Clan from 1616-1868) was living in the palace below the castle, it was not rebuilt in the peaceful time of the Edo period.

The main grass-covered area of the castle is open to explore freely, and the remaining stone foundations give a good indication how massive the castle must have been. The most impressive thing about the ruins is the view one can admire, looking down to the castle town below and the mountains surrounding it. In late autumn, a thick morning mist settles in the valley, giving the impression of a 'floating castle'. It is also a good spot to take photos of the steam locomotive, coming to Tsuwano on the weekends (not all year though). The train arrives just before 1pm, and goes back to Yamaguchi at 15:45.

As far as photo opportunities go, the return departure from Tsuwano to Yamaguchi sees the train climb valiantly uphill, with the billowing plume of smoke behind it making for the perfect snap.

Note: Since renovation work started on the castle's stone foundations, the outer keep (Demaru) is closed until the Olympics. However, the main keep is open for visitors.

The castle ruins are accessible by a chair-lift up to the ridge of the mountain, and about 15 minutes walk from the upper station to the main keep. The start of the chair lift is on the road of the parking lot of the Taikodani Inari Shrine.

One can also climb up to the castle, starting from the same road (leading to the parking lot of the Taikodani Inari Shrine). The entrance has only Japanese signs, but the coordinates are 34°27'51.9"N 131°46'06.0"E.

Another hiking route is towards/from Washibara Hachimangu Shrine and the connected horse archery grounds (which is the only one remaining in Japan). The Yabusame horse archery ceremony is held there every year on the second Sunday of April. 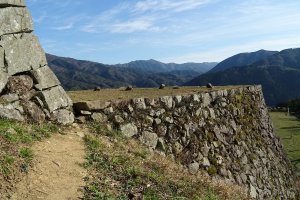 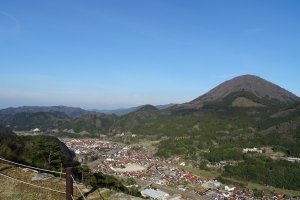 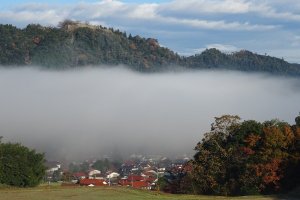