Come for the tea, stay for the drama

Even in the middle of the pandemic, perhaps even more so, it is important to laugh or to sometimes even cry. This we learned very well thanks to the members of the Shizuoka Performing Arts Center (SPAC) who reminded us of that with a full day of tea and drama in Shizuoka Prefecture.

We started this trip like we would most tours, on a bus with the tour conductor giving us instructions. Mr. Nihonyanagi introduced us to the events that would occur that day, and provided us with a bottle of coffee or tea based on our preferences. It took about 25 minutes to arrive at our first location.

Arriving at the parking lot for the SPAC Outdoor Performance Center on the Nihondaira Plateau, it truly hit all of us that that the day was an absolutely stunning one for our first activity, tea picking. Staff from SPAC guided us to their tea farm where the tea farmer who takes care of the tea showed us how to pick tea leaves. From there we took our baskets and began picking the tea. You wouldn't believe how therapeutic it was just to be out in the sun, picking tea, and chatting with friends.

After picking tea for about 45 minutes, we were then called in by the staff to be given a tour of their outdoor theater set. The theatre had recently finished a run of the Japanese version of Mary Poppins, and there were many umbrellas still lining the stage. We were allowed to get up close and could see how the set had been designed for a more 1960-70s feel. You could really tell how much effort was out into creating an authentic setting, even going so far as to emulate the look of calendars from that era. There was even time for some Q&A with the director before we were whisked away for part two of the tea picking.

Now that my body had gotten used to picking tea leaves, I was working like a machine to collect as much as I could in 45 minutes. When I started getting hungry, the farmer helpfully told me that it is perfectly okay to eat the tea leaves. Definitely not something I was ready for, but it turned out to be far more delicious than I would have imagined. When we finished we were surprised to learn that as a group (my group plus 40 other people) we had picked almost 50kg in an hour and a half. The best part being that for our efforts, we would be receiving some of those tea leaves as a present.

Next stop was Yume Terrace, located at the top of the Nihondaira Plateau. This place has some of the best views available in all of Shizuoka City. On a perfect day, you are able to see out to Mt. Fuji, Suruga Bay, and the Izu Peninsula. Clouds were in the way of Mt. Fuji this time but as they say, two out three wasn't bad at all.

Now that our appetites had been built up, it was time for us to thoroughly pamper ourselves at the Nippondaira Hotel and its washoku restaurant, Fukian. The hotel itself is located perfectly for a view of Mt. Fuji and Suruga Bay, and even our table had a fantastic one to take in while enjoying our meal. The food itself consisted of high quality nigiri sushi, tempura, and of course, soba noodles that utilized tea leaves produced in Shizuoka.

For those with specific dietary restrictions, the restaurant goes out of its way to make sure they are catered for. A vegetarian member of our party received a vibrant plate of vegetable sushi while the gluten-free member's meals were constantly being checked to make sure that the food was safe to eat. The overall the service and ability to cater to specific needs was incredibly high class.

After our meal, we headed back to the city for the drama portion of the day, which would start with a visit to the Strange Seed Festival being run by SPAC. While we were only visiting for one day, this festival is held over four days (May 2nd - 5th), and features members of the troupe appearing in a variety of comedies and dramas throughout both the city and Sumpu Castle Park. Some of the shows require an advance reservation but most are free.

After taking in a couple of shows and relaxing in the hammock zone, it was finally time for the evening's main event, an outdoor stage play of the Greek tragedy, Antigone. The effort on display just for the stage was impressive to say the least. A full blown pool about 35cm deep was the base for the stage which had several rocks jutting out of the water where the actors would stand. It may be hard to tell in the photo but the entire backdrop was made so that the actors could act through their shadows. The lighting was absolutely on point. The monitor in the middle of the backdrop even showed subtitles for the entirety of the play, so I never felt lost while watching. This truly made me felt like everyone involved in the production wanted as many people as possible to fully enjoy their performance.

This type of tour might only be available for a few days in May next year, but if you have a chance, I highly recommend participating. From being able to pick Shizuoka's famous tea leaves to sitting in an outdoor theater for a Greek tragedy, it was a complete day of unique cultural experiences. I only hope that I will be able to participate again next year!

Sipping green tea in Shizuoka since 2015. 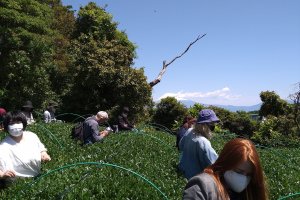 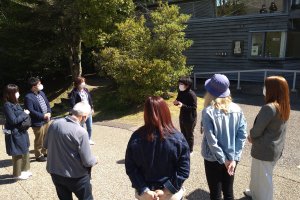 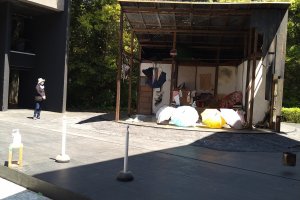 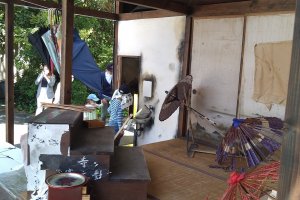 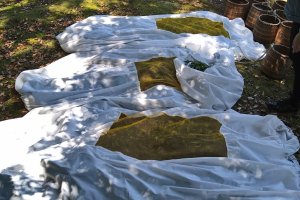 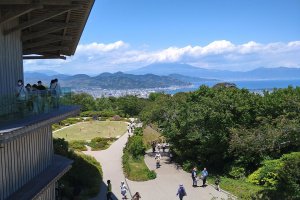 Sherilyn Siy a month ago
I have a greater appreciation for tea after watching my son make it with Sayama tea leaves for his homework. https://en.japantravel.com/blog/making-sayama-tea/66938
Reply Show all 0 replies

Elena Lisina a month ago
I wonder if it's really difficult to pick tea leaves?
Reply Show all 2 replies

Richard Sweet Author a month ago
The actual picking of the leaves isn't too hard (the farmer did a fantastic job of explaining). Rather than picking, it's standing in the hot sun when you forget water!
Reply

Elena Lisina a month ago
Hot sun would be a challenge for me! Thanks for the reply, Richard!
Reply

Elizabeth S a month ago
Wow, the Japanese interpretations of classic dramas look intriguing. And it's impressive the company provides subtitles. I want to see a show there!
Reply Show all 2 replies

Richard Sweet Author a month ago
I really do believe that just putting in the subtitles alone is such a fantastic gesture. You could tell they really wanted as many people to view and enjoy as possible.
Reply

Sleiman Azizi a month ago
I agree. I think it's a great gesture.
Reply

Kim a month ago
What a fantastic way to spend a day! Really enjoyed reading this recap!
Reply Show all 2 replies

Richard Sweet Author a month ago
It really was a great day. I really am looking forward to the next events that they (SPAC) put on.
Reply

Kim a month ago
If you have time, please keep sharing your adventures with us on here! :)
Reply

Sleiman Azizi a month ago
A Greek tragedy in Shizuoka? Awesome internationalisation.
Reply Show all 1 replies

Richard Sweet Author a month ago
You really could feel that at the event. What not being forced to hunker down during the pandemic, they regularly do events throughout the world. You can tell they really want to bring as big of an audience as possible!
Reply
12 comments in total