Chofu City is blessed with plenty of history and landmarks that go beyond the usual temples and shopping streets. A history of film, revolution, science and comics all find a surprising place in this famous western Tokyo city. Here is a simple introduction to the historical sites and landmarks of Chofu City and how to reach them.

The Birthplace of Kondo Isami, now a small shrine and well, recognises the pivotal role that Kondo Isami played in the changing fortunes of Japan's modern history. A 4th generation master swordsman, Kondo found himself leading the defence of the collapsing Tokugawa Shogunate, only for him to eventually be captured and then executed.

A 10-minute walk from Tama Station on the Tamagawa Line.

One of the city's lesser known historical tidbits is its role as one of Japan's first film studio location. The Film Actors Monument commemorates the original site of Chofu's movie studio, Nikkatsu Tamagawa, with a movie camera sculpture as well as a large relief carved with the names of scores of film stars from yesteryear.

A 3-minute walk from Keio-Tamagawa Station on the Sagamihara Line.

A 20-minute no. 14 or 66 bus ride from Chofu Station on the Keio or Sagamihara lines.

A retro wooden building built in the mid-20th century, Kitaro-chaya is a cafe themed on the popular Gegege no Kitaro manga. This classic building has been designed with Japan's mythical yokai ghosts in mind and features manga drawings by the managa's creator, Mizuki Shigeru. Naturally, plenty of traditional sweets and tea are available.

A 15-minute no.6 or no.56 bus ride from Chofu Station on the Keio or Sagamihara lines. 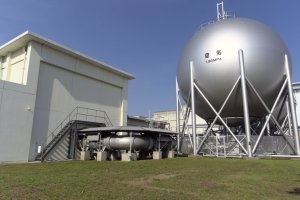 Elizabeth S a week ago
So that's where Kondo Isami came from.

Closer to my neighborhood, Nagareyama City Museum has artifacts and displays about the time he spent there after his battles with the Meiji government.
https://en.japantravel.com/chiba/nagareyama-city-guide/60899
Reply Show all 1 replies

Sleiman Azizi Author a week ago
He paid the price for the changing times.
Reply

Justin Velgus a week ago
I love this compact area guides. They make it so easy to discover and share about an area. I am looking forward to more!
Reply Show all 1 replies

Sleiman Azizi Author a week ago
Thanks! I've completed quite a few so far so if you haven't yet explored them, there are plenty to tie you over until the rest of the series is completed :)
Reply

Kim a week ago
Nice roundup!
Reply Show all 1 replies

Sleiman Azizi Author a week ago
Thanks!
Reply

Sander van Werkhoven a week ago
I want to visit that Aerospace Center, but even more so, I want to visit Kitaro-chaya! I haven't seen that much of the anime, but it just looks so nice....
Reply Show all 1 replies

Sleiman Azizi Author a week ago
I'm a fan of the building's retro aesthetic.
Reply

Bonson Lam a week ago
From Samurai to space Rockets this place has the past and future covered.
Reply Show all 1 replies

Sleiman Azizi Author a week ago
It's pretty impressive. The more I looked, the more I discovered.
Reply
10 comments in total
Back to Contents