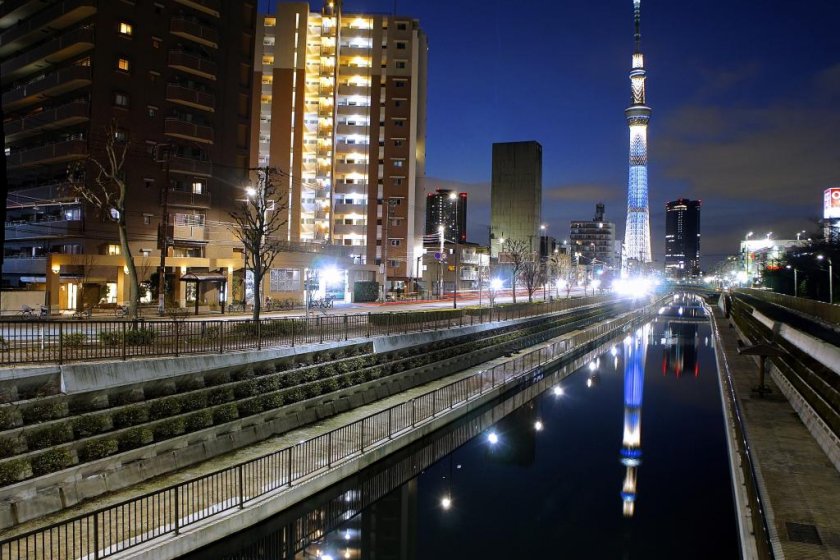 Reflecting on the Skytree's opening in 2012

Reflection of the Tokyo Skytree near the Jikken-hashi Bridge

On May 22 in 2013 it had been exactly one year since the Tokyo Skytree, the newest and tallest attraction in Tokyo, was thrown open to the general public. The tower was under construction when the Great East Japan Earthquake struck on March 11 in 2011, but workers did continue the work unabated, and on March 18 the tower reached the full height of the 634 meters as planned.

Unfortunately I missed the inauguration day of the Tokyo Skytree in 2012 due to a business trip outside Japan, but I have been taking photographs of the city's new highlight in the skyline since then, and I am presenting a few examples here.

But first of all, this is my birthday present for the first anniversary: a short time-lapse video:

Jikkenhashi, a bridge in the silent neighborhood in Oshiage, ​just a few meters from the Tokyo Skytree, has been seeing a lot of activity since the opening, as the water flowing underneath the bridge reflects the tower beautifully. Beyond Jikkenhashi Bridge there are further small overhead bridges right up to the Kameido area from where the reflections of the Tokyo Skytree can be seen, too. If you can go there at nightfall—the light-up of the Skytree is truly spectacular.

Another area from where I have observed the beauty of the tower is in the bylanes around the Kameido Shrine, where the tower reflects in traffic mirrors, even though not its complete construction but part of it. Driving from the Oshiage area towards Kinshicho, the Tokyo Skytree keeps reflecting in your car's rear view and side mirrors—that gives a nice shot, too.

For its first anniversary, the Skytree had been dressed in 12 LED color combinations, and you were able to see the tower lit up in those colors in the nights before and after the big day on May 22. I'm pretty sure they will repeat the illumination event every year around the same time. In 2012 the illumination took place for about 4 weeks in total, starting around the 2nd week of May. So watch out for the great colors in the coming years! 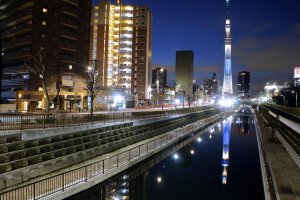 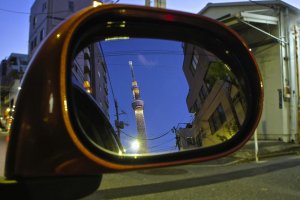 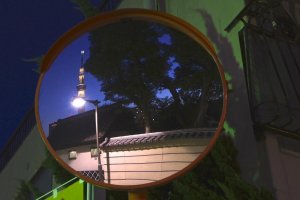 Andre Moreira 8 years ago
Loved the idea of the reflection in the car's side mirror! Reflections of Tokyo Skytree are so beautiful :)
Reply Show all 0 replies

Manish Prabhune Author 9 years ago
Thanks michael! The skytree has been so motivating for many Tokyo-ites
Reply Show all 0 replies

Michael Flemming 9 years ago
As always your photos are superb; and kudos for an interesting angle for an article and the forethought put into it.
Reply Show all 0 replies
3 comments in total