Race down the streets of Tokyo as your favorite character

There’s nothing like cruising down the bright city lights of Tokyo’s streets at night, as Mario, in your own Mario Kart. After playing Mario Kart on your game consoles for years, it’s time to bring it to reality.

Upon your arrival at the go kart rental place, you will face a wide selection of characters you can dress up as. From your favorite characters in the Mario family to cartoon characters like Pikachu (Pokemon), Chopper (One piece) and more, you’ll surely find the one for you. After you’ve transformed into your long-desired character, it’s time to learn how to drive the go kart. Despite never having driven by myself, nor in Japan before, I was confident because the controls were simple and similar to that of a car. There were right and left gears for lane switches and turns, as well as rear view mirrors. Keep in mind it’s essentially a real car, as it is being driven onto the streets with the other cars. Therefore, players must all attain appropriate driver’s license for safety precautions. Insurance is also included in the fee.

Once seated and engine heated, the lights on the go kart brightened. At that moment, I was a little nervous, but overwhelmed by the thrill. Rest assured, it gets even better. As it was already past 8 PM, there were few cars on the streets. Starting from Roppongi, the instructor guided us through the streets. After a few turns, we were suddenly on the Rainbow Bridge to Odaiba! That was one of the highlights of the tour - feeling the breeze of the wind as we sped through the highways at 60 km/h in open air, as opposed to the slow speed limit on the tumultuous streets of Tokyo. Throughout the drive on the highway, there were rarely any other cars and it felt like our personal rainbow road course from the Mario game.

We took a quick stop at the Decks Tokyo Beach of Odaiba, enjoying the illuminations as we sipped on hot cocoa. From the second floor of Decks Tokyo Beach, we were able to overlook the cityscape of Tokyo. After some rest, we advanced to our next destination - Tokyo tower. As with driving to Odaiba, driving back via the Rainbow Bridge allowed for one more adrenaline rush. Now that we were back in the city, we began to receive special attention. Pedestrians were turning heads and snapping pictures of us, or with us. Drivers rolled down their window, making conversations with us. Every few seconds, people would wave at us with a big smile on their face, fascinated. Once we got to Tokyo Tower, we parked our go karts once again and enjoyed the majestic Tokyo Tower from right below. Of course, our tour guide passionately took photos for us.

Next, we headed back to Roppongi. Throughout the drive back through the city, our guide would occasionally hop off her go kart to take photos of us on the actual streets of Tokyo with the other hustling cars. She also made sure we were okay, safely guiding us through the traffic. Although I was still new to driving, I felt completely safe following her. For the last stretch of our course, we passed through the stellar seasonal illuminations on the streets.

Upon returning, the owner was very sweet and instantly printed a photo from earlier on while we changed out of our cozy onesies upstairs. He also gave us a heat pack for our return in the chilly winter weather. The staff were all very professional and friendly from the beginning to the end, enhancing our experience.

This Mario Kart experience was a win-win in so many ways. Becoming our favorite characters from one of the most classic games, touring around the best attractions of Tokyo by the best means of transportation, and experiencing fame like never before. I can honestly say that this was the best thing I’ve ever done in my life. Hands down, I’ll be back again. So go grab your friends, put on a onesie and get ready to have the time of your life! 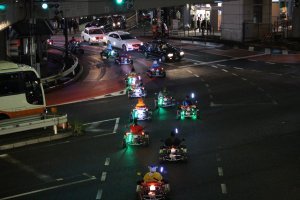 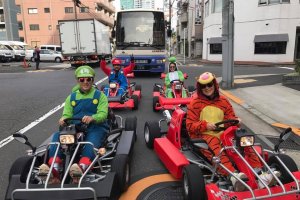 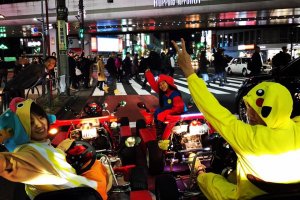 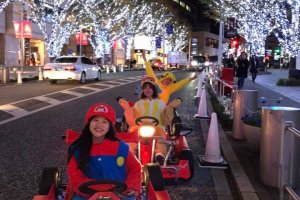 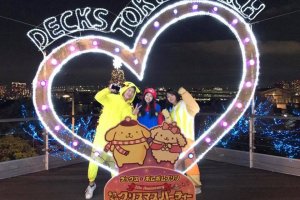 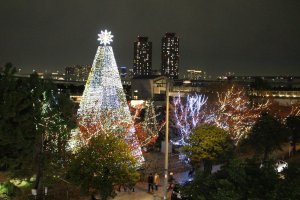