Around a million irises in hundreds of varieties

Each year from around mid-June to the first week of July, Yamagata's Nagai Ayame Park is filled with the color of around a million irises in bloom. From those million flowers, there are around 500 different varieties of them! The park holds an annual iris festival to celebrate their beauty, and it typically includes extra events like stage performances, sales of local produce, and even horseback riding.

Admission to the park is normally free, but during the iris blooming season there is an admission charge of 500 yen for adults and 200 yen for children.

For those who opt to drive to the park, it's around a 20 minute drive from the Nanyo Takahata IC on the Tohoku Chuo Expressway. On-site parking is available for approximately 200 vehicles. 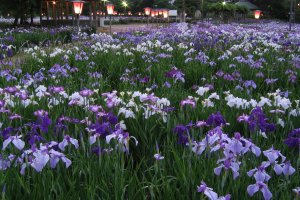 Elena Lisina a year ago
I visited Japan too early or too late for iris blooming, alas!
Reply Show all 1 replies

Kim Author a year ago
Hopefully you can enjoy them in the future!
Reply
2 comments in total