Ode to the temple of poultry

Sometimes we come across products that are more popular overseas than at home. For example, Bossa Nova, one of the most beautiful music genres, is wildly popular around the world, and highly respected in the music community, but not in its home country, Brazil.

In the same way, you might think Chicken Teriyaki is one of the most popular dishes in Japanese cuisine. However, most Japanese would rather dine out on Teriyaki fish than chicken. If this is the case, then how do Japanese people like their chicken? What is the most popular chicken dish in Japan? It is Oyako donburi, or “parent and child chicken rice”, to take its literal meaning in Japanese. Like its namesake, it has both the parent (chicken) and child (super soft scrambled egg) elements. Such a basic name though, does not do the dish justice, but this is country cooking with no flourishes.

Now I want to introduce Hinaiya, the most popular restaurant for Oyako donburi, and named after its most famous ingredient, a delicacy so luxurious that it was only served to the lords from the Seventeenth to Nineteenth century. They use only female chickens for its texture. Thankfully these days, even commoners can partake of this royal fare.

Akita’s Hinaijidori is, along with Nagoya Cochin and Satsuma Shamo, the top chicken varieties in Japan. Hinai Chicken is so good; it was certified as a protected breed more than half a century ago, like Kobe beef. Some people say it tastes like Copper Pheasant. As the delicate nature of Hinai chicken isn’t quite compatible with modern farming (kind of like trying to hand make millions of gallons of craft beer), its roosters have been bred with the Rhodes Red hens to produce the Hinai Jidori. It has all the taste of the Hinai chicken, but with greater availability.

The whipped egg is super silky smooth as cream. From the first bite, you will be moved by its texture and rich taste, something that you won’t forget for a long time. Of course, there are absolutely no preservatives. It is chemical free, a hundred percent organic dish. I was amazed that really delightful cuisine does not require any flourishes to make it extraordinary.

Another great dish to try is the Hinai-Jidori kiritanpo-nabe, possibly Akita’s most celebrated dish. A nabe is a hot pot, where all the ingredients and juices of the Hinai-Jidori chicken is cooked together, making it a great winter meal. Add to this seasonal vegetables like green onions and Japanese mushrooms, it is healthy as well as a delicious communal dish. Complementing the chicken is Kiritanpo, new Akita rice that's boiled, then rolled around a cedar like stick and slowly roasted in a charcoal hibachi fire. The rice is then simmered in a pot with the amazing broth of chicken and vegetables, and all delivered for your culinary pleasure for ¥1,800.

If you prefer seafood instead, try the fresh fish swimming in the tank. Pick the one you like, and it will be cooked to order.

Hinaiya is located just west of the city in the Kawabata entertainment district. Just 15 minutes walk west of JR Akita Station, it is where salary men and tourists alike come out to play, and the friendly service has them coming for more. 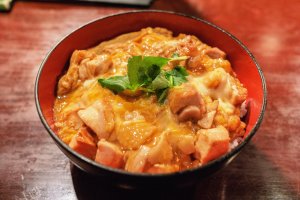 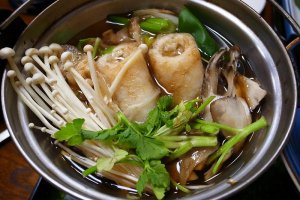 Bonson Lam a year ago
The disparity between what is popular at home and abroad reminds me of Fosters Beer, popular abroad, but you struggle to find it in most pubs at home.
Reply Show all 0 replies
1 comment in total