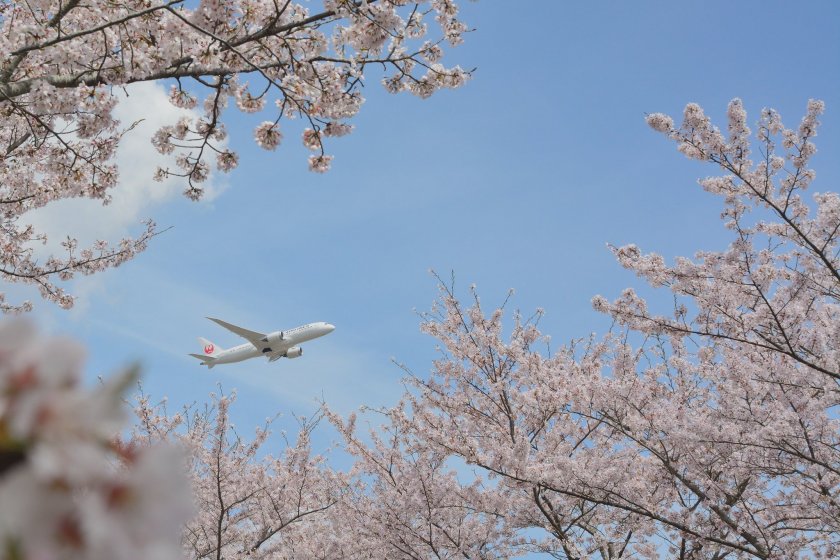 Narita’s name is familiar to millions of travelers who pass through Narita Airport every year. Most visitors to Japan make a bee line to Tokyo from here, but there is so much to see and do - the grand Shinshoji Temple, the antique Narita Omotesando street, and traditional festivals such as New Years celebrations and Gion Matsuri in summer. Besides these treasures, Narita also has great view spots for appreciating modern aircraft. Close to the city center is Sakura no Yama Park, a popular place for plane spotting.

Sakura no Yama, or Cherry Mountain, is on a rise at the north end of the 4000 meter main runway. Facing the runway is a wide lookout spot with benches. Here, you can see the main terminal, watch the planes taxi, and take off and land, and feel the roar of the jet engines as the planes soar over you. Depending on the winds, the planes will approach over your shoulder as you are facing the terminal, or fill your field of view as they take off right in front of the lookout. Plane spotters are close enough to easily identify the airlines’ insignia and to see the landing gear in action.

The park is especially popular in March and April during cherry blossom season. About 300 cherry trees including delicate yoshino, double-blossomed hill cherry, and trailing shidare cherry, dot the park and ring the lookout.

If you don’t bring your own picnic, there are produce vendors and cafe in the park. For visitors who take road trips in Japan, Michi no Eki, road stations may be familiar. These are rest stops on major roads where travelers stretch their legs and pick up gifts and snacks. But this one, directly on the flight path, is labeled Sora no Eki, Sky Station. A visit to Sakura no Yama Park isn’t complete without a photo of a plane over the roof of this building with a quirky name.

Take a taxi from Narita Station. The ride is about 15 minutes.

Take the bus from the east exit of Narita Station. The ride is between 20 and 30 minutes. 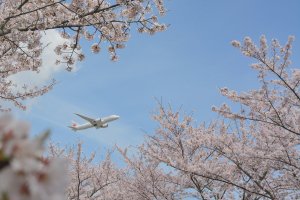 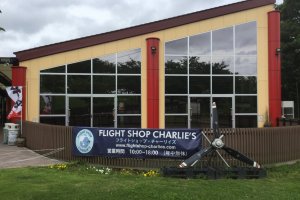 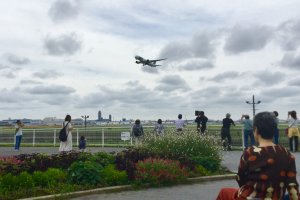 Scott Brause a year ago
I feel guilty about my long history of telling friends that Narita is the last place you want to stay in Japan. Obviously, I am terribly prejudiced and ignorant. Thank you, Liz, for the enlightening article and, yes Kim B., that is a lovely shot of the JAL jet framed in full bloom cherry blossoms!
Reply Show all 1 replies

Elizabeth S Author a year ago
If you only ever saw the airport and the green countryside on the way to Ueno Station, you wouldn’t know about the charming Narita Omotesando and the temple complex.

There are many choices of accommodation at different price points, too.
Reply

Kim B a year ago
The photo of the Japan Airlines plane with the cherry blossoms 100% needs to be on their promotional advertising! It's beautiful!
Reply Show all 1 replies

Elizabeth S Author a year ago
So true! The park can get crowded in cherry blossom season. But what a treat, Hanami cherry blossom viewing with big birds overhead.
Reply

Sleiman Azizi a year ago
Narita comes across as an unheralded treasure trove.
Reply Show all 1 replies

Elizabeth S Author a year ago
As an historic town on an old pilgrimage route, it has a lot of antique charm, but it’s got a modern side, too. There’s a lot to see and do there.
Reply
6 comments in total