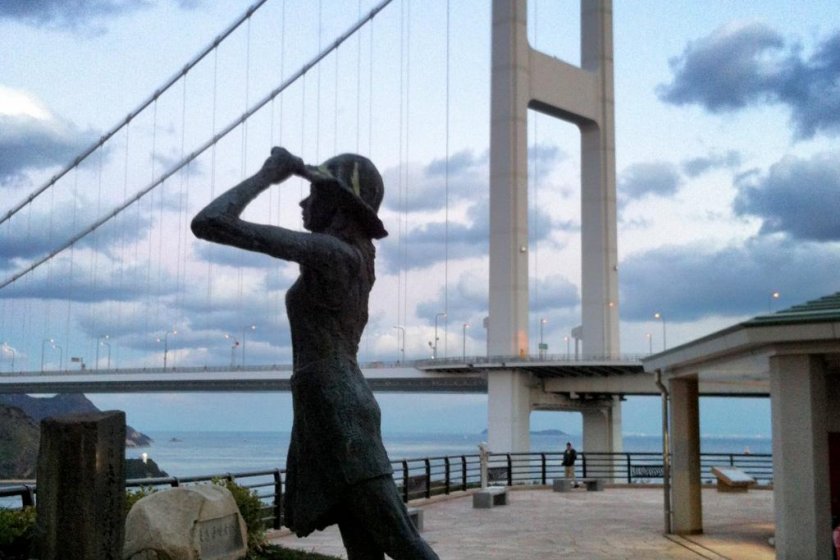 Perhaps the best view of the Kurushima Straits Bridge

A statue in front of the Kurushima Straits Viewing Pavilion

Between the island of Shikoku and Honshu, the main island of Japan, lies the Seto Inland Sea. A chain of islands, large and small, straddles this body of water between Imabari in Ehime, and Onomichi in Hiroshima. The islands are linked by the Shimanami Kaido, a highway with spectacular suspension bridges over the sea passages.

The first suspension bridge on the Ehime side is the Kurushima Straits Bridge, which enjoys the distinction of being the world’s longest suspension bridge structure. If this description sounds a little equivocal, that’s because it is. The ‘bridge’ is actually a series of bridges with a couple of islands in the middle. But the roadway is straight and continuous, meaning that it is sort of all one bridge. It certainly looks impressive, and it does have its beauty too, from a variety of viewpoints.

Viewpoints are not lacking either. The bridge can be seen from many places in Imabari, and even from the mountains in Matsuyama. But perhaps the most comprehensive view can be had from the Kurushima Straits Viewing Pavilion, close to the start of the bridge on the Shikoku side. The pavilion actually comprises an observation deck on a hilltop with a 360-degree view of the bridge and its approach road, and lower down, a pavilion. In front of the pavilion is another observation platform that affords a rather intimate view of the bridge, from the first tower nearby, right into the far distance. The pavilion itself, though small, serves as a museum, souvenir shop, information centre and a rest facility with toilets.

The museum is free to enter and it takes about ten minutes to look around. But the various models and diagrams are quite self-explanatory despite the lack of English titles, and it gives you a better appreciation of what was involved in building the bridge. Needless to say, it’s an engineering marvel.

I last visited at dusk just after the sun set. The low light showed the roiled surface of the Kurushima Strait that results from the powerful currents that run through the Inland Sea. The traffic passing over the bridge and the boats passing under it were turning on their lights, creating a magical spectacle. But whatever time or season you visit, you can be sure of witnessing a grand and memorable scene. 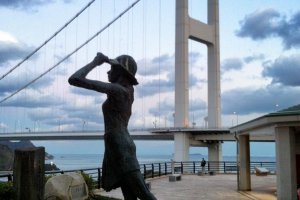 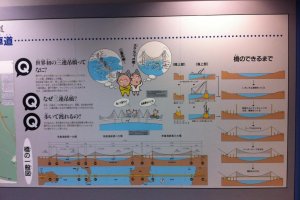 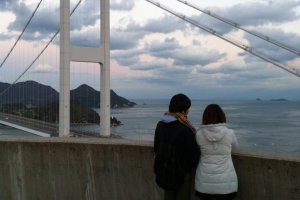