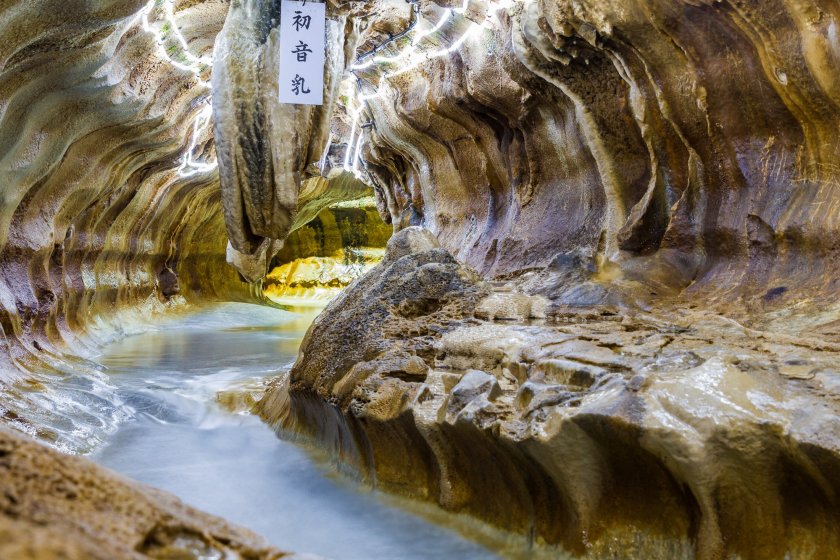 The icy waters flowing through Senbutsu Cave make for a fantastically splashy Japanese spelunking adventure. Passing through the cave mouth with its teeth-like projections hanging down, you can walk beside the river during the first 480 meters. There, you’ll reach the Narrow Winding Path and need to step right in to continue your expedition. Wade through the rest of the twisting pathway to the end of the electric lighting at the 900-meter mark. Some 30 named rock formations can be found along the way, with occasional stalactites and colorful mineral deposits. Expect 40 minutes to travel to the end of the lit path and back.

No special equipment is necessary and kids are welcome, though more adventurous cavers will want flashlights to continue past the end of the electric lighting. From there, the ceiling lowers and then a tunnel and three waterfalls appear. The map ends at that point, but the cave actually extends for several more kilometers.

Designated a natural monument in 1935, this cave began to form tens of millions of years ago during the days of the dinosaurs. Along with some 200 other caves, it formed under the rocky karst landscape of Hiraodai due to the geological characteristics of limestone regions. Rainwater picks up carbon dioxide in the atmosphere, then more carbon in the soil, giving it a mild carbonic acid content that slowly dissolves limestone. The area is full of sinkholes as well as caves carved out by ancient underground rivers. Only three caves are open to the public, the others being Mejiro Cave, with 2000 meters of underground to explore, and Ojika Cave, which features an unusual 25-meter drop at the entrance. Important fossils including Naumann's elephant, bighorn deer, and other rare extinct animals have been found, and some parts of some caves have been closed to tourists to protect the finds. More about this special region’s geology and fossils can be found at the Kitakyushu Museum of Natural History.

The water runs mostly ankle-deep and doesn’t go over the knees of older children, but some toddlers might need carried in a few areas. The narrow, winding path of solid rock can be tricky, with plenty of chances to hit your head or slip on the cave floor smoothed by the constant rush of water. Although the first part of the cave is fairly flat, staircases, tight passageways, and the river make wheelchair access impossible.

According to the cave management, the air temperature is a constant 16 degrees Celsius (61 degrees Fahrenheit) while the water is a constant 14 degrees Celsius (57 degrees Fahrenheit) throughout the year. In summer, the cave is navigable in a T-shirt and shorts despite the lower temperatures. In winter, it can be warmer than the outdoors but the initial shock of the water on your feet is quite stark. Fortunately, the cold will numb any pain after a few minutes and your legs will feel fine.

Visitors need to descend a steep staircase through the forested mountainside from the parking lot down to the entrance. There’s a small café and restaurant, a souvenir shop, free water slippers to borrow, and toilets. Admission is 800 yen for adults, lower for children, and the cave is open from 9-5 on weekdays, 9-6 on weekends and holidays, 365 days a year. Small pets can gain entry if they are carried in a bag, available at the ticket booth for 200 yen.

Compared to Akiyoshi Cave in neighboring Yamaguchi Prefecture, Senbutsu is very narrow and lacks some of the more touristy enhancements, like announcements piped in or “adventure trails” for kids. This is a rock-solid caving adventure that keeps the nature real. 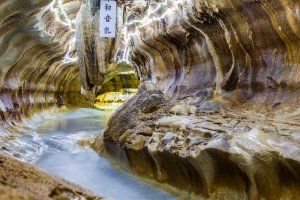 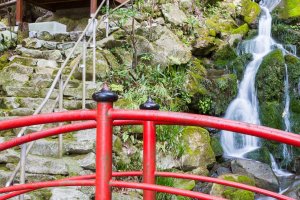 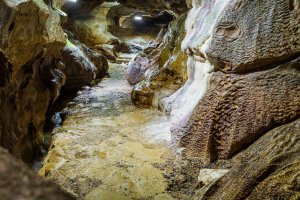 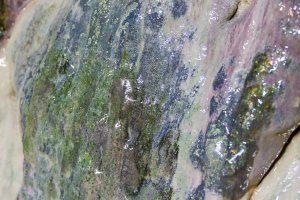 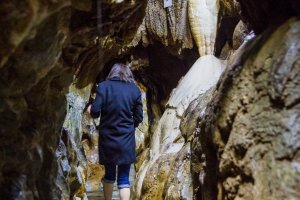 Tristan Scholze Author 5 years ago
Thank you, both!
Reply Show all 0 replies

Relinda Puspita 5 years ago
Picture 1 is like a painting.
Reply Show all 0 replies
3 comments in total