An elaborate temple dedicated to the fiery wisdom king Fudomyo

Serene Buddha statues abound in Japan. The gentle and sweet Kannon at Ofuna, or the peaceful Great Buddha at Kamakura are images that visitors to the Tokyo area may be familiar with. But if you venture to some famous Shingon Buddhist temples, you may be startled by the scowl and aggressive posture of Fudomyo. This fierce looking figure, a messenger of the Buddha Dainichi Nyorai, is revered at Itabashi Fudoson, a temple complex in Ibaraki Prefecture.

The temple located in Tsukubamirai City is said to have been founded by Kobo Daishi in the year 808. This Buddhist luminary, also known as Kukai, is credited with bringing Buddhist texts from China, enriching the knowledge of Indian languages, overseeing public works, founding temples, and formulating the esoteric Shingon School of Buddhism. The temple houses nationally important cultural properties, statuary of Fudomyo accompanied by his two sons, Ryodoji. These figures, normally hidden in the heart of the temple, are revealed to the faithful twice a year in January and November. It's said that Kukai himself created these images.

Fudomyo, who often flanks Dainichi Nyorai in Buddhist iconography, is rage transformed into salvation. He’s depicted with a fearsome visage, a fiery halo, a blade in his right hand to cut through ignorance, and a rope in his left hand with which to bind up demons. He glowers at parishioners with bulging eyes, often one closed, the other glaring, and stands on a rock for stability. Although he looks frightening, he is a protector for humanity, and at this particular temple, he is petitioned for easy childbirth and the wholesome goal of raising children.

The temple complex has a number of buildings that are designated as prefectural cultural properties. Enter by the impressive tower gate, which dates from the Edo Period. The gate and the main temple are attractive with elaborate carvings, crimson pillars, and statuary. The three story pagoda on the site, surrounded by tall trees, is photogenic.

If you time your visit for January 28th, or November 28th, you may be caught in the glare, and receive the blessing, of the concealed Fudomyo and his progeny at this popular pilgrimage destination. 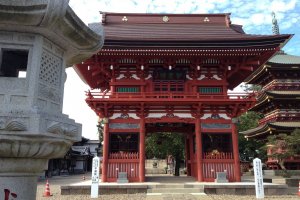 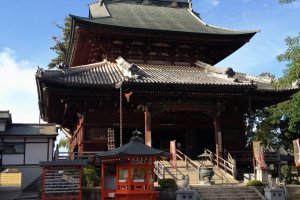 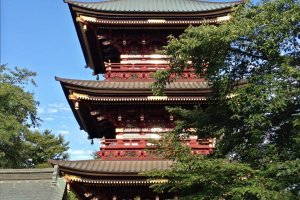 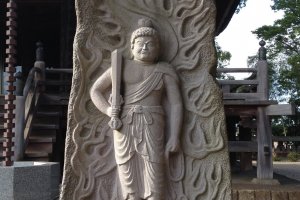 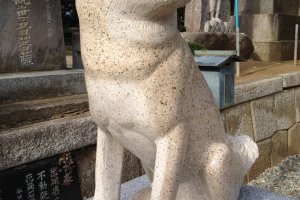 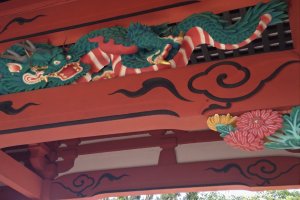 Bonson Lam a year ago
The description of Fudomyo is almost like a metaphor for the scary Japanese father (drunken or otherwise).
Reply Show all 1 replies

Sherilyn Siy a year ago
Fascinating how such a fierce looking deity is the patron for easy childbirth. Who would have made the connection? :)
Reply Show all 0 replies

Sleiman Azizi a year ago
Beautiful looking structure. I think that many first time visitors would be surprised at just how many incredible temples and shrines exist beyond the more famous ones.
Reply Show all 1 replies

Elizabeth S Author a year ago
Locations outside of Tokyo are replete with storied and gorgeous temples.
Reply
5 comments in total