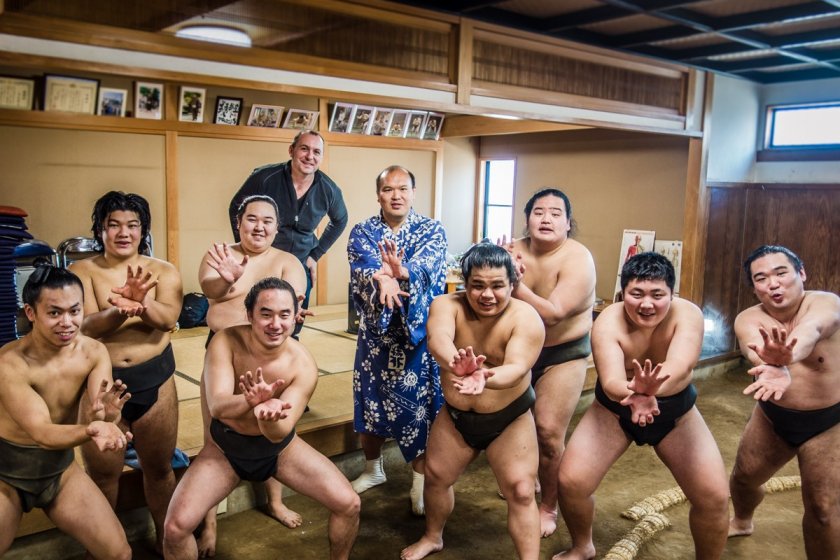 Venture inside the hidden world of Sumo

Group picture with the future stars of Shikihide Beya

As a fairly frequent traveller to Japan I’ve always wanted to experience the excitement and awe of a Sumo competition but sadly my only glimpses of Sumo were from my hotel TV screen. I mostly seemed to visit Japan during non-tournament months or get put off by my Japanese friends telling me that the cost of a good seat was hugely expensive. However, if you’re interested, there is another and maybe a better way to get a closer insight into this fascinating side of Japanese culture.

Recently hearing of a new tour which allows you to visit a Sumo School I literally jumped at the chance of joining it. The schools are often known as a Stables or ‘Heya’ in Japanese. This Heya is just one hour trip North East from central Tokyo by train to Sanuki in Ibaraki Prefecture. The journey was simple and uncrowded as I was travelling the opposite line from grey commuters bustling into Tokyo. At the station I was met by the friendly tour guide nicknamed ‘Mao’ not for obvious reasons. His English was thankfully great and we headed straight to ‘Sumoland!’

Five minutes from the station by car we arrived at a subtle modern-ish green clad building. February being cold here it was sweet relief to be hit by a warm and cozy atmosphere where a traditional wooden screened lobby opened straight onto six Sumo wrestlers and their Master warming up and beginning to spar. Hair immaculate and dressed in their traditional 9 metre long belts (Mawashi). Mawashi are never washed but dried and cleansed by sunlight only to retain the luck of previous battles.

The Heya’s atmosphere was very welcoming. The wrestlers were curious to see visitors but keen to focus on their work under the watchful eye of the mighty Kitazakura, a towering 190 cm (6’3”) 167 kg recently retired and well respected Sumo champion. He sat regally on the platform overlooking ring buzzing with Sumo activity.

Whilst most of Japan is thinly insulated and shivering with cold the Heya’s parrafin heaters create a toasty atmosphere both warming a large pot of tea and optimising muscles to gracefully and powerfully manoeuvre around the ring. The bouts became increasingly ferocious as the wrestlers reached their peak but the most exciting rounds involved similarly matched wrestlers crossing the ring several times with gritted teeth before victory. Seeing the action from just a few metres distance you can really sense the exertion and see the red-flushed patches on their skin from hard contact, slapping and witness the heavy thud of butted heads.

If you have any amusing sizeist preconceptions about Sumo this will soon evaporate into pure admiration. Mao explained that the Sumo train hard in the early morning and early evening, getting to sleep early and waking early too. Their life is disciplined and regimented and the Heya feels sacred akin to an athletic temple with Sumo being a religion more than simply a sporty career choice. A stranger standing on the wrestling ring would seem wrong to me; like climbing on a church altar.

An apprentice Sumo stays at the Heya for most of his life over a six year plus internship and will only visit family for a few days maybe twice per year. To become a Sumo (Rikishi in Japanese) you have to dedicate your life to discipline and hierarchy with the least experienced supporting the chores for the Heya, but don’t expect any wages until you start winning tournaments! Like doctors, many come from a long family line but you can sense the heritage here.

"An army marches on its stomach” and food is key to Rikishi life (two walk-in refrigerators are proof of that). They eat very healthily and Kitazakura’s skin literally glowed which is a feat for even the most charismatic and successful 42 year old. He explained “all Sumo’s cook well” and he was right, the ‘chanko nabe’ stew made from chicken and vegetables was natural and delicious, but I was defeated after two bowls whilst the Sumos just kept going! I’m not a small guy, but I don’t have an excuse. Opposite me was one of the rising stars of the Heya and you could see he was hungry for success and had the appropriate appetite to match his ambition.

Kitazakura was a very popular character in the Sumo world with a flamboyantly high ‘salt throw’ used for symbolically cleansing the ring (and likely sometimes the audience). He has a strong fan base and you can see many clips of his fights on YouTube.

For those interested this is a fantastic day tour and highly recommended. I was very sad to leave but so happy to meet them. As a bonus, Mao included a trip to the world renown Kagami Crystal factory where you can see fine hand blown crystal being made by amazing craftsmen. They are famous for their technique of layering and etching coloured glass (their technique known as Edo Kiriko) forming beautiful intricate designs often presented to world statesmen as gifts from Japan. Seeing is believing as photographs don’t fully show the beauty. I watched a craftsman carving tiny fish onto a vase and his skill seemed magical. Kagami is a flagship subsidiary of a company which manufactures 95% of all automotive glass in Japan so honouring their founder Kagami-san and furthering this ancient skilled craft is obviously their motivation here.

Please call or email the tour operator Mao for Sumo schedule and dates (see contact details on the top right of this article). 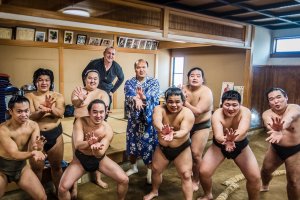 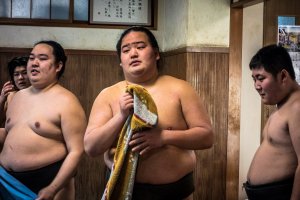 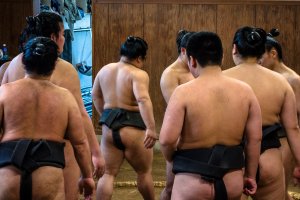 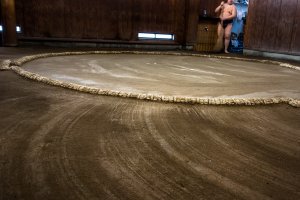 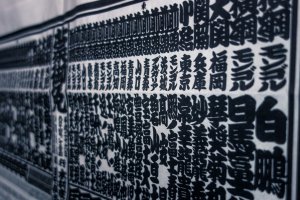 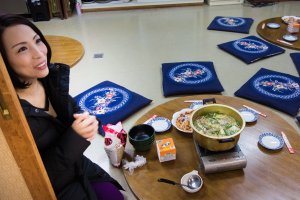 Stacy Kurokawa 5 years ago
I would love to take this tour with my young son. How much does it cost?
Reply Show all 0 replies

Susan Tumanon 6 years ago
Glad I found this article. I have been wanting to see a sumo tour. Great information!
Reply Show all 1 replies

Martin Giles Author 6 years ago
This stable was great and thanks to them I'm now making Chankonabe stew at least twice per week - delicious! The May Tokyo sumo tournament just finished so there will be more Sumo tours available June and August (the non-tournament months). The next tournament is in Nagoya during July. Tokyo's 'Ryogoku' again in September!
Reply

Kayla Bob 6 years ago
Those are some really great photos! I always wondered how people get into this line if work...is it often hereditary? Many interesting stories to be told I'm sure!
Reply Show all 1 replies

Martin Giles Author 6 years ago
I think you are right, apparently there are some quite well know Sumo families. So I guess Yokosuna's must be torn whether to marry a supermodel or someone more sturdy to keep the genes strong!
Reply

Lester Goh 6 years ago
This may sound a little creepy, but that is one 'cute' kamekameha photo. Thank you for the video, I have always wanted to have a glimpse of the lives and training of sumo wrestlers.
Reply Show all 1 replies

Martin Giles Author 6 years ago
Thanks for letting me know the name for that power move - I've always wondered! Yes, they are all great guys at Kitazakura's stable.
Reply

JapanTravel Guest 6 years ago
Fantastic article, I really enjoyed reading that! I agree that this is a fascinating part of Japanese culture and I am glad you got to witness this as you mentioned it can be very expensive to get a good seat at a tournament. "Mawashi are never washed but dried and cleansed by sunlight only to retain the luck of previous battles" is something I found particular interesting. I used to watch WWF as a kid and I now know why the name 'Rikishi' was used :p. Some wonderful photos too, thanks for sharing this!
Reply Show all 1 replies

Martin Giles Author 6 years ago
Thanks Daniel, tournaments are a great vibe but the tickets can be expensive if you don't get them as soon as tickets are released. Visiting the school gives a more intimate view of Sumo life.
Reply
11 comments in total