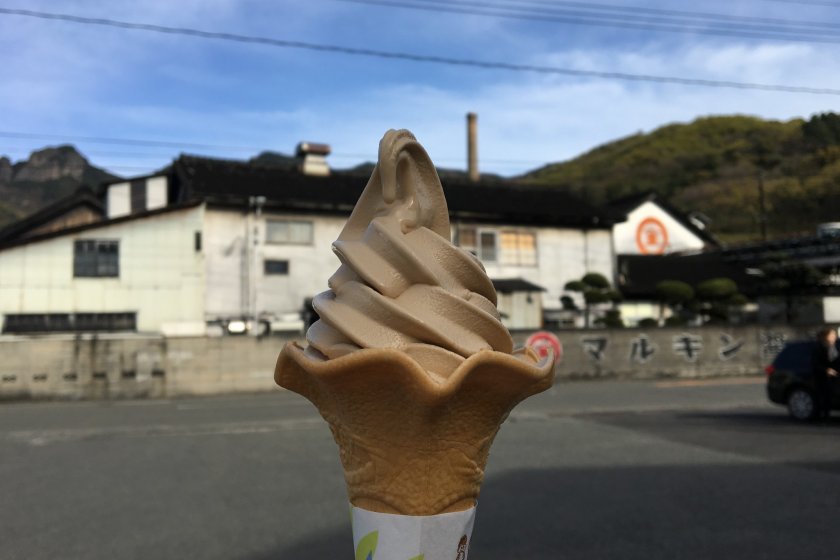 A unique snack in the Hishio no Sato area

Most people treat soy sauce as a salty dip, a condiment that adds flavour to your food. But, have you ever had soy sauce flavored ice cream? Walk around the south-eastern coast on the island of Shodoshima and you will have many chances to try this oddly flavored ice cream. The area that connects Yasuda to Sakate port is also known as Hishio no Sato - the Home of Soy Sauce. Here you will find many traditional soy sauce factories with distinctive, burned wooden walls and the smell of soy sauce in the air.

Soy sauce is essentially made up of four main ingredients: soy bean, wheat, salt, and water that is fermented over a period of time. So, the idea of having that mixture in a nice, cold and normally sweet ice cream seems hard to swallow. I bought my soft serve cone at the Marukin Shoyu Historical Museum for ¥300 and it looked fairly unremarkable. A brownish tint that one might mistake for caramel or coffee flavor, though you do get a whiff of soy sauce when you bring it close to your face. Tentatively, I licked it, not quite knowing what to expect. The flavor was surprisingly light, and while a little weird at first as your brain tries to comprehend these two unrelated flavors together. I found myself actually enjoying this salty dessert and finished it quickly.

After finishing my ice cream, I then popped into the neighboring museum which had lots of interesting dioramas and exhibits explaining the traditional tools and processes used to make soy sauce. Next to the museum is another building with a viewing area where you can observe the modern day processes of making soy sauce in the factory, quite unlike the exhibits from the museum.

Marukin is not the only place that makes the soy sauce ice cream. Apparently, they taste a little different depending on where they were produced. So, be adventurous and try them all if you have the time! Besides soy sauce ice cream, Shodoshima has succeeded in turning many of their other famous local foods into ice cream flavors. You can also try Tsukudani (fish, meat, or seaweed boiled in soy sauce), Moromi (unrefined sake), and even Olive flavors! 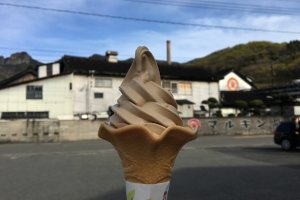 Elena Lisina 5 years ago
I bet it's good! I ate dango with soy sause and it was tasty and unusial!
Reply Show all 2 replies

Jaclynn Seah Author 5 years ago
I love Soy Sauce, but having it in my ice cream was a first :)
Reply

Elena Lisina 5 years ago
But it was good, right?!
Reply

Cathy Cawood 6 years ago
I think I'd like to try this. I had red miso ice-cream somewhere (Nagoya? Mie?) and it was fantastic, so I think soy sauce flavor would work too.
Reply Show all 1 replies

Jaclynn Seah Author 6 years ago
i'm game to try any flavour at least once :P
Reply

Lee Tan 6 years ago
Tried it. It's delicious!
Reply Show all 1 replies

Jaclynn Seah Author 6 years ago
it is a lot less icky than you would imagine it to be :)
Reply
7 comments in total