There is good reason to crave tacos and taco rice when in Okinawa. The latter, which consists of taco flavored ground beef spread on a bed of rice and topped with shredded lettuce, diced tomatoes and cheese, was conceived on this island in 1984. But 30 years before that in 1956, Charlie's Tacos was the first "taco place" in Okinawa, serving tacos with shells made of rice flour. There are two branches of Charlie's Tacos. I visited the restaurant in Kokusai Dori, a popular shopping street lined with shops where you can get custom printed t-shirts, cans of SPAM, boxes of ready-to-eat Taco Rice, and nicely wrapped beni-imo pastries to take home as gifts. Charlie's Tacos is tucked in the second floor but you can easily find it with its conspicuously large sign outside that is brightly lit at night.

Stepping inside the restaurant, one feels transported back to the 1950s. The chairs, tables and shelves look like they have never been changed. The doors to the restroom look like they have been taken from a Western set (i.e. two-door wooden, swinging type).  Prices are not from the 1950's but are still reasonably priced, with most items at ¥690.

We ordered the three piece taco set (beef, chicken and tuna), the enchillada, and Charlie's Rice (taco rice) to share. Of the three dishes we ordered, the tacos was my favorite. The shell was somewhere between the hard and crispy American taco shell and the soft Mexican tortilla. It was quite different from any of the tacos I have ever had before and was surprisingly good. The chicken was perfectly seasoned, and the other toppings fresh. What made the tacos outstanding though is the tangy, spicy sauce served in a separate dish. Rumor has it that only the founder Mr. Charlie knows the recipe. The beef variant was also very good. I would have to say though that I'm not a fan of tuna mayonnaise on my tacos but I could see where this might be something that suits the Japanese palate. After all, tuna mayonnaise onigiri is one of the most popular items in convenience stores.

We had to order another three piece taco set, this time with two beef and one chicken since the other people in our party were not able to try some. I would go back just to have an entire plate of tacos all to myself.

A visit to Charlie's Tacos should definitely be in everyone's Okinawa Bucket List. 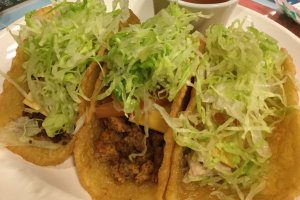 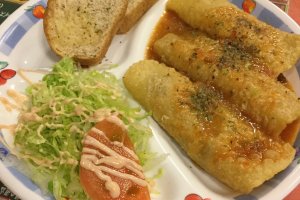 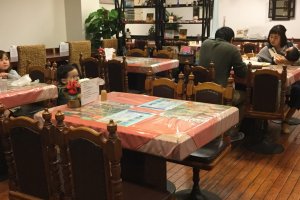 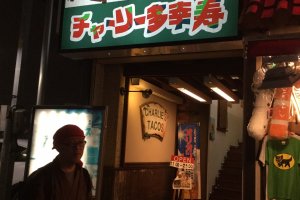 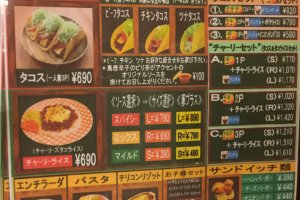 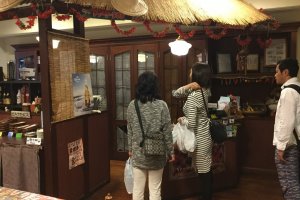 Bonson Lam 2 weeks ago
There is a certain charm to stepping back to a no nonsense 1950s feel. It just feels more authentic before renovations and gentrification takes away its character, just like having truck drivers visit the ramen shop before it became cool with the fashionistas. https://en.japantravel.com/kumamoto/ajisen-ramen-kumamoto/3029
Reply Show all 0 replies

Elizabeth S 11 months ago
A few years ago, I had taco rice here. It's a must visit place on Kokusai Dori.
Reply Show all 1 replies

Bonson Lam a week ago
A Taco place that is still going strong after 30 years is a testament to its delicious food and great service!
Reply