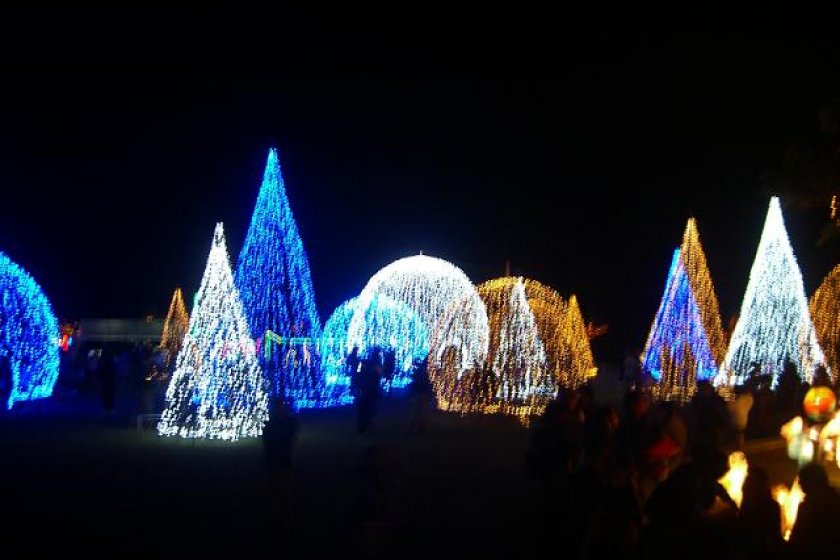 One of the best illumination sites in Okinawa

Itoman is a city which you might have heard of as a horrendous battlefield of the battle of Okinawa in WWⅡ. In contrast to its devastating past, the city hosts a joyful event full of lights and cheer. Itoman Peaceful Illumination marked its 13thanniversary this winter, now one of the best illumination sites in Okinawa.

The venue is Itoman's Kanko Noen(Tourist Farm), which specializes in the farming of acerola fruit(Barbados cherry) and passion fruits, and sells wines produced at the on site winery. There you can also enjoy some sporting activities during the day. Under the sunlight, the farm is idyllic enough to wind you down from the hectic days of routine. When night falls in December, however, it reappears in total disguise of thousands of beads of LED lights.

Once stepping into the arched gate, you’ll meet festive food stalls, giving off a mouth-watering smell of various quick-to-eat foods. Walking past the appetizing magnets, yellow-lit animals and Christmas characters will give you a warm welcome and the first photo chances, especially with kids. Then, there awaits a wow-moment; pale-lit corns and spheres sitting on a grass field ahead on your right, and flood of bright technicolours ahead on your left. No fixed route on the site but I suggest to take the left field first. There is a huge display of a phoenix in tricolor lights, so huge that you might not notice that it’s shaped like the bird of fire at first glance. There are also neon-sign artworks designed by Okinawa Prefecture University of Arts students, arcades of champagne gold and jade green, lit-decorated green house full of tropical plants and fruits(mixture of the opposite seasons) to lite up your mood. Street performance like fire show and a wide range of entertainment shows are also scheduled on the site and the main stage during the event. The left site is filled with multi-coloured shrines and cheers of kids and adults alike, all bright and animated.

On the other hand, the right field projects a different aura with the big corn and spheres lit in winter white, aqua blue and amber yellow. It creates a soothing atmosphere, allowing the visitors to chill out from the hustle-bustle lingered on the right field. These luminous artworks are open inside so the strollers can appreciate the stardust-shine inside out.

According to the official HP of the event organizer, one of the purposes for the event is to send a message of peace to the world in the form of illumination from the last, but not far from the least, killing field of the Battle of Okinawa. Kids running around merrily, shouting “wow, look at that, Mum!” and parents after them, shouting back, “mind your step, girl!” Elderly people wandering relaxed, couples reflecting beams of bright on each other. This is peace, which the deceased at the Battle of Okinawa would have hoped for and we have to keep hold of for the future.

The illumination will be held until January 3rd, and laser show on December 24th/25tharound 8:30p.m. Fireworks on December 25tharound 9:00p.m./New Year’s Eve around midnight. There are lots of shows and stage/on-site performance, so just indulge yourself in the festive air as a way to wrap-up 2011!

Hello to everyone who is on the lookout for Okinawa’s attractions! Already popular island getaway of the subtropical climate, there are more for you to find and enjoy every bits of Okinawa. I hope to share what is unique about this warm island with you. 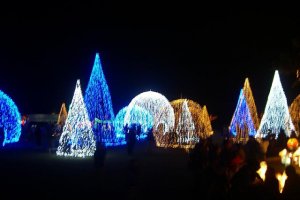 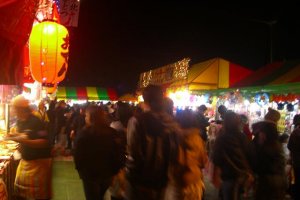 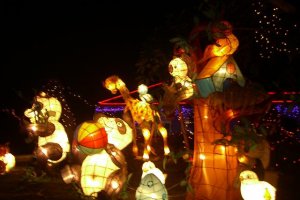 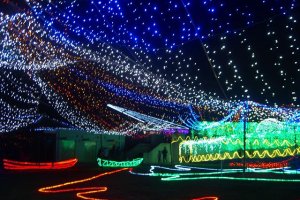 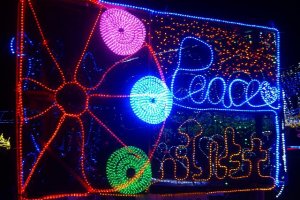 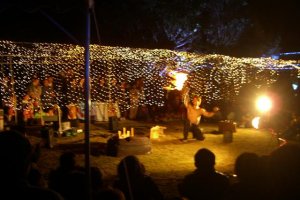 Kathryn Spoor 7 years ago
There is no better way to celebrate the holiday season here in Okinawa then checking out one of the many illuminations throughout the island and the Itoman Peaceful Illumination is one of the most beautiful. Whether you are wanting to spend a romantic evening strolling through the lights or see the joy in your little kiddles eyes as they dance in the huge structures made of thousands of tiny bulbs you'll enjoy this celebration.
Reply Show all 0 replies
3 comments in total