Gateway to the Yaeyama Islands

In many locations around the world, an airport is no more than a place of transit. It's somewhere you try to get in and out of as quickly as possible. In Ishigaki's sparkling new domestic terminal, you might find yourself lingering longer than expected.

Painushima Airport, whose name comes from the local Yaeyama dialect, opened to the public in spring of 2013. It replaced the older airport which sat at the southern end of the island, quite close to the ANA Intercontinental Resort. There's basically one road leading in and out of the new airport, so you can't get lost in your rental car! There is also a main parking lot in front of the airport, a taxi stand just to the right of the exit and a bus stop for several local bus routes on the island.

The airport itself offers typical services, such as eating and shopping. For food, you can pull up a chair at the sushi bar in the arrivals hall for a taste of fresh tuna or slurp up a bowl of the island's Yaeyama soba, featuring hunks of local aguu pork. If it's a cool treat you're after, don't miss out on the tropical ice cream flavors - expect tastes like guava, coconut, mango and shikwasa (a local citrus). This is also a good place to do any last minute shopping, as the dual gift shops in the arrivals hall are well-stocked with island souvenirs ranging from colorful shisa​ (lion-dog statues) to handmade local pottery to treats made with the local purple sweet potato. If you spend a fair amount of time browsing the shelves, you could also stumble across treats like mango jam or coral jewelry.

Painushima Ishigaki Airport does boast two unique features in its arrivals hall. Right outside the baggage claim, a circular tank showcases several species of subtropical fish that can be seen on a snorkeling tour in one of the nearby bays. More engaging, however, was the butterfly garden that was tucked away behind the ANA airlines check-in counter. A clump of butterfly bushes and palm trees is the picturesque habitat of the black and white striped "paper kite" butterfly, so-named for its apparent resemblance to washi paper.

As a note to travelers, there is not much in the way of food or diversions once you pass through security. A small ice cream shop, a tiny soba stand and a few racks of magazines are really all that's available. If you want to stock up on supplies for the plane ride home, make sure you do it in the arrivals hall. 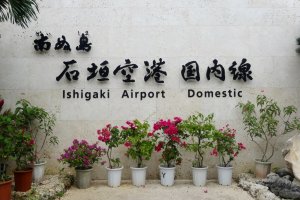 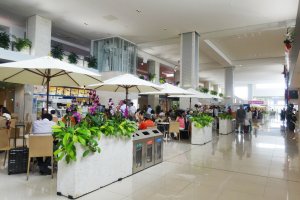 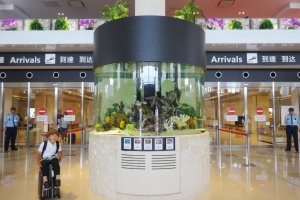 Wouter Thielen 5 years ago
Going there this week-end! Maybe good to mention that there are buses every 15 minutes from Ishigaki Airport to the harbor, where most of the people will go to to visit the Yaeyama islands. The bus trip is about 30 minutes, so take that into account when planning your trips/ferries.
Reply Show all 1 replies

Mandy Bartok Author 5 years ago
Excellent addition, Wouter. We rented a car, so while I noted the bus stop, I didn't note the times! Have a great trip!
Reply
2 comments in total