Jekyll and Hyde over the East China Sea

We all have our own Jekyll and Hyde moments. Like drooling over a rare cheesecake after two days of dieting. Or having one beer too many and regretting the headache the next morning. One question I often play in my mind is, in our moments of oscillating between splurging and self-denial, whether premium economy is worth paying extra for, when you can get by on economy class. While it is difficult to justify when premium fares are twice as much, Cathay Pacific recently had a 40% off sale on their premium fares, allowing me to sit back in comfort without worrying too much about the hip pocket.

Yes there is an element of contentment as you ready yourself in the dedicated cabin while the economy class passengers eye longingly at the extra real estate. The premium economy cloth seats are in 2 3 2 configuration on the Airbus 330. At 38 inches pitch and 19.3 inches width, this is similar to the business class seats on Jetstar on the same aircraft type. However, as the seat dividers don't fold up or drop down, you won't be able to sleep flat unlike a row of 3 economy class seats. So this is better suited for a day flight than an overnight flight, especially if you can find a row of 3 or 4 empty seats on economy class, rare as that is in these days of tight aircraft utilization.

Other benefits on premium economy include the almost iPad sized personal TV screens and the complementary no name noise cancelling headphones being one of the best around. Despite being over the wing in premium economy the humming noise is kept reasonably low, especially when you are using the entertainment program. Having a USB charger and a storage shelf underneath the TV screen is something that other airlines can learn from.

There is a wide range of entertainment programs and Cathay Pacific specializes in video and audio programs from Japan to India, as well as mainstream Hollywood hits and some art films. Unfortunately many of the Asian TV programs are designed for their home audience, being only in the local language, which is the same limitation as JAL.

If you can understand or read Chinese subtitles, then you are in for a treat as the best entertainment onboard are in Chinese, with more insightful films and documentaries. On the other hand, what is seemingly hundreds of choices become more manageable with the playlist or short list feature, another functionality that other full service airlines could seek to emulate.

For lunch on the sector from Sydney to Hong Kong, I tried the low salt low cholesterol option (available with at least 48 hours’ notice) for the first time, and while visually appealing with its lush green salads, the fleshy red of the tomatoes, the bright autumn orange of the mashed sweet potato contrasting with the dark rich green of the beans, my first taste of the beans unfortunately reminded me a bit like a hospital meal. Mind you, it was a quality hospital meal, but steaming the food with no seasoning somehow takes some of the taste away. Put it down to out of season food perhaps, or it could be that I have been spoilt by gorgeously appetizing Kyoto tofu cuisine, proving that tasting and healthy can coexist. Fortunately it got better as I moved on to the chicken fillets. I agree that it was hard to keep chicken breast tender mid-flight, and they weren't too far off the mark with their chunky grilled fillets, well matched with the mashed sweet potato which rescued this dish. The salads on the other hand was fresh, crisp and its taste lifted to just the right level by the tart mustard vinaigrette dressing.

The low fat raspberry friand like muffin was pleasant enough, but being on a healthy diet the little devilish voice inside me keeps saying that I should have something more substantial for dessert. A rich chocolate ice cream that I had on JAL might not qualify as low cholesterol, but a raspberry sorbet or frozen yogurt could hit the spot. If I were flying Premium economy again, I would go for their standard menu, which unlike the healthy option is a step above economy.

There is no dedicated bathroom in premium economy but the ones in economy are spacious, made to look more so by the simple duck grey walls. The hand and face moisturizers are a nice touch especially on a long dehydrating flight.

Cathay Pacific offers premium economy on all long haul flights from Australia, Europe, North America and South Africa to Hong Kong, while onward flights with a premium economy ticket to Japan are in Economy Class only, unless you pay a full fare premium economy ticket, giving you eligibility to upgrade to Business Class on the 3 to 4 hour sector to Japan. While this is technically in the realm of their Regional Business Class offering, they have thank fully continued their long haul business class configuration to Japan, with lie flat seats, a necessary luxury on the red eye flights leaving after midnight to Osaka and Tokyo.

The risk with flying on an indirect flight like this is that every stopover exponentially increases the risk of delay. Bad weather, like the typhoon season in June and September, or operational reasons, means that you are likely to be sitting in Hong Kong Airport for a few hours. Thankfully the business and first class lounges here are much better than their cramped sister lounges in Kansai airport, with a calm and modern elegance akin to a private library. The cook to order noodle bar is authentic and healthy, and their buffet bar is well stocked with Asian and European finger food. While there are at least four flights a day between Osaka/Tokyo and Hong Kong, I still ended up with a seven hour layover in the lounge, and listening to every announcement of a flight delay. In the scheme of things Cathay has a good on time record, but if you are used to JAL like domestic punctuality, and schedule your meetings with minutes to spare, you may need to reconsider your contingency plans. 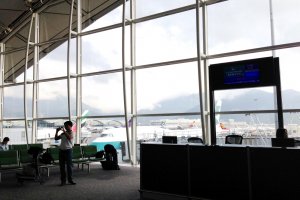 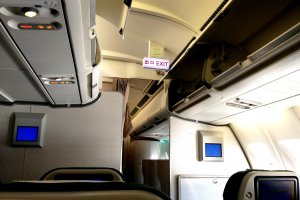 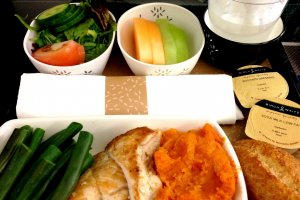 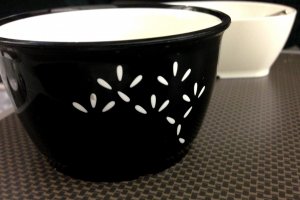 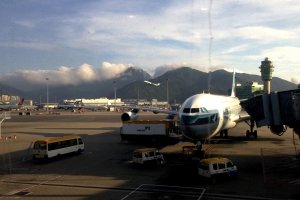 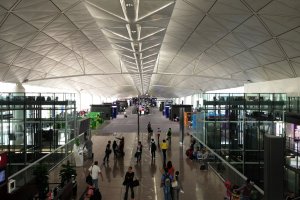