Around 8000 hydrangeas from 50 species in bloom

Each year during the month of June, Saitama's Nogoji Temple is home to an impressive rainy season sight - around 8000 hydrangeas from 50 species add some extra beauty to the grounds and draw visitors from around the country. One of the popular photo spots at the temple is the bell tower surrounded by the colorful blooms.

Typically, admission to the temple is free, but during the hydrangea season there is a charge of 300 yen.

For those visiting the temple via public transport, head to Kagohara Station on the JR Takasaki Line. From there, look for the station's north exit, and take the Kumagaya City's Yuyu Bus (there are various city buses - take the one named "Glider Wagon") for 30 minutes. 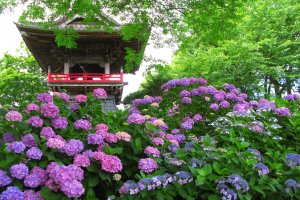 Lynda Hogan a month ago
Unfortunately the temple is closed to the public this year :-( They will close from May 29th to July 4th to deter people coming to see the stunning hydrangea. Roll on 2022!!
Reply Show all 0 replies

Elena Lisina 4 months ago
8000 - amazing!!! I wonder if it's possible to catch both tsutsuji and ajisai in some period of time, maybe in late May?
Reply Show all 2 replies

Kim Author 4 months ago
I think it could be possible, but most of the tsutsuji places I know are usually in April. If there were late blooming tsutsuji and early blooming ajisai it might happen!
Reply

Elena Lisina 4 months ago
I see, thank you.
Reply
4 comments in total