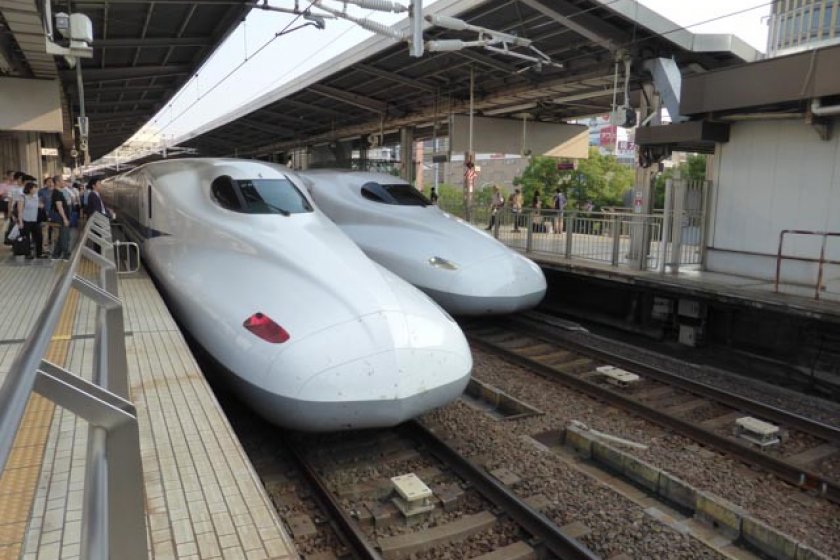 First Time on The Shinkansen

A romantic yet slightly askew image of the Bullet Train

Two Shinkansen heading in opposite directions at Nagoya Station

Before my visit to Japan, I had a romantic yet slightly askew image of the legendary Japanese Bullet Train (The Shinkansen). It goes as follows:

Diplomats from around the world gather with me on the Bullet Train platform. We are all wearing suits of course; this is a formal affair. Flashes pop from the cameras of the newspaper photographers as the Empress of Japan makes her appearance on the train platform. She strides up to the front of the train and proclaims in her high-pitched voice:

"I name this train The Shinkansen! May God bless all that are riding on it."

She then takes a giant bottle of sake, and cracks it down on the long front nose of the bullet train. The band on the platform begins playing the University of Wisconsin fight song as everyone waves back at their loved ones.

After everyone is boarded and the train rockets from the station, a squelching crackling voice comes over the intercom. It gives out the record-breaking speed as we reach them. 80 miles an hour, 100 miles an hour, 150 miles an hour. The train begins to shake as my cheeks begin to ripple with waves. Everything outside the window becomes a blur as the train approaches hyper-speed.

If you have not been on the Shinkansen yet, perhaps you have your own image of what it would be like. Mine was a little off.

These trains are stopping and going with New York subway regularity. Each Bullet Train you see has 16 cars, holds at least 1300 people, and rockets out of Tokyo Station every 5 minutes. This is not a luxury cruise liner or a vehicle with space shuttle like exclusivity. The Shinkansen is the definition of a workhorse.

There are 323 bullet trains in operation every day just for the route between Japan’s two largest cities; Tokyo and Osaka. Those trains move over 390,000 people a day, a staggering number indeed. To help you visualize this, imagine the entire city of Cleveland Ohio hopping on a train, and zipping down to Washington DC for the day.

They have a yearly average speed of about 170 mph yet a yearly delay time that is measured in seconds. And that is only one of four lines covering the whole country. These are numbers that may even surprise the train friendly Europeans. Did you hear that Italy? That’s 323 trains that never leave a second late.

Perhaps you've taken a train trip before where boarding with bags is a long drawn-out affair before the train finally starts chugging out of the station. This is not the case with the bullet train. When the 16-car train comes to a stop at the platform people get out, people get on, and the train rolls away within a couple minutes. Some stations even operate with a stopping interval of 3 minutes.

Another image I could not quite wrap my head around was going 200 miles per hour. Or even 150 for that matter. The truth is, the train is so silky smooth that you never even know that you are traveling so fast. There are no bumps or any jerking motions when it slows down or speeds up. The only time you can feel the speed is when you look out the window and see buildings and trees whipping by so fast that your brain has trouble processing it.

Somewhere along life’s path I blurred the Shinkansen with an Agatha Christie novel. My image of a fast train whisking diplomats and dignitaries across the country is all in my head. The people who ride it are regular commuters. They are old ladies, and little kids, mixed among businessmen and families. They are just regular people, and a lot of them.

It took an actual trip to on the Bullet Train for me to finally understand one of Japan’s international icons. The Shinkansen is simply a marvel of planning and engineering that you should experience yourself when you come to Japan.

And now that I think of it… I don't remember them playing the University of Wisconsin fight song either.

I'm a Writer, Comedian, Graphic Designer, who loves Japan, its language, culture and history. In Japan I have lived and worked as an English Teacher, and have traveled throughout Japan for the last 15 years. I still cant get enough of it. I have a blog (japantravelcafe.com) where I talk about everthing form eating natto to learing Japanese from car names. Japan is such a fascinating place that I can't seem to write this stuff down fast enough.   In America I've worked in advertising for about 15 years as a Production Artist. 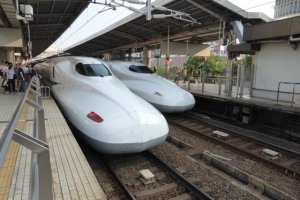 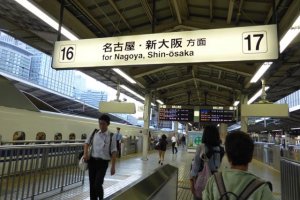 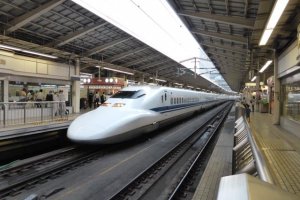 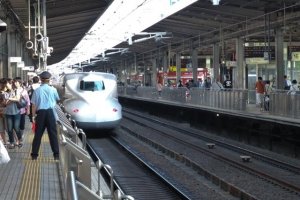 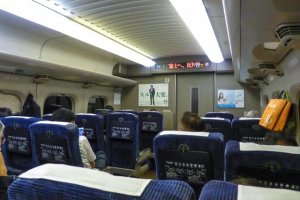 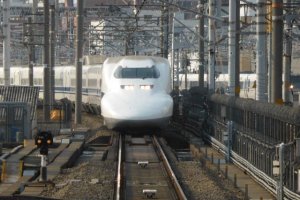 Jihad Mahmoud 3 years ago
I was excited too for my first time on Shinkansen but had a very different perspective of how I imagined to be. It is a must-try!
Reply Show all 0 replies

madarasan 6 years ago
You had me laughing at "Do you hear that Italy?" I have fond memories of train travel(ES Italia, IC, Regionale, sleeper train) in Italy and among them are train delays. Nothing gets the heart pumping when you have a train to catch and you're still stuck in line to buy your ticket even after budgeting an hour for the task or when at the last moment, you hear that "Attenzione..." overhead, announcing that your train will be arriving at a different track on the other side of the station thus the mad dash with your luggage along with a mass of people. Plus, the fun part of climbing up those steps along with your luggage on the train. Now if Italy will adapt a Takkyubin service like they do in Japan, that would be awesome. Best thing about traveling on a Shinkansen, eating ekiben.
Reply Show all 0 replies

Larry Knipfing 6 years ago
A very funny yet informative article. One other way you can feel the real speed of this train is to be standing on a non-stop station platform when one comes whipping through. Wow!
Reply Show all 0 replies
3 comments in total