Indulge yourself in luxury for a reasonable price!

If you live in Japan, you must have heard the name of 'Prince Hotel' at least once.  Prince Hotels in Japan were so named because some of the hotels built in the early years used land that once belonged to members of the imperial families. In 1947, many imperial families were demoted from nobility to commoner status, and had to make a living for themselves. Some of them sold their valuable properties located in the center of Tokyo, and that's where Prince Hotels were built. That's why some Prince Hotels in Tokyo are so luxuriously spacious.

The most important reason why I love this hotel so much is its space. Once you step inside this hotel you'll know what I'm talking about. The hotel lobby is surprisingly spacious. There are many luxurious, expensive hotels in Tokyo, including foreign ones, but they are not as spacious as this...thanks to the ex-imperial family's vast property. The lobby is not the only place which is spacious - every room has 29.9 ㎡ or more.

The second reason is that each room has a balcony. It's small, but whenever you need fresh air, you can open a window and go out onto your balcony to enjoy the breeze and the gorgeous city view. That's rare to find in Tokyo!

The third reason is the reasonable price. You might think it would be very expensive if it's a high-ranked Prince hotel located just five minutes from JR Shinagawa Station, but actually it is not. Although price varies depending on the season, or which day of the week you stay, a single stay in a double room will cost from 8,000 yen to 20,000 yen more or less.

Furthermore, the Haneda and Narita Airport shuttle buses stop at and depart from this hotel. Also, there is a free shuttle bus service to and from JR Shinagawa Station. Although it's a classic hotel, it's not posh at all. It's relaxing and cozy while providing a luxurious atmosphere. It even has a convenience store on the first floor. Perfect!

However, these are not the only reasons why I love this hotel. This hotel seems to be the regular accommodation for some foreign performing arts companies such as ballet or opera companies. Once when I was staying here, a regular-looking western man who was sitting across a lobby table from me suddenly started to sing an opera tune with a beautiful baritone. Probably he was just checking his voice 'quietly', but opera singers' voices are loud. I felt like I was in a concert hall listening to a beautiful opera performance! On the same day, when I was walking through the lobby, another regular-looking man walked toward me singing opera. I heard another voice in the elevator, too. What a luxury for a music lover! Also, when I was staying here to go see the Don Quixote of Paris Opera Ballet, they were coincidentally staying here too - the whole company! (Unfortunately I didn't see anyone though. I just saw a poster in the corridor saying, 'Welcome Paris Opera Ballet Company.')

Anyway, this hotel is classic, international, spacious, convenient, reasonably-priced, and even has a beautiful Japanese garden in the vicinity to explore for free. And if you are lucky, you may even be able to listen to an impromptu performance of talented opera singers during your stay. I highly recommend that you try out this hotel if you have a chance. In fact, you should manufacture a chance! 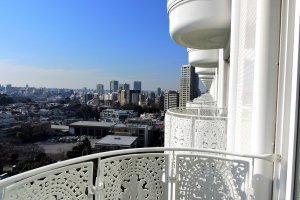 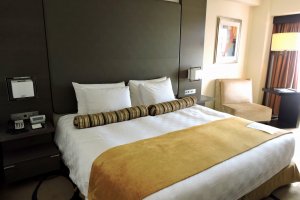 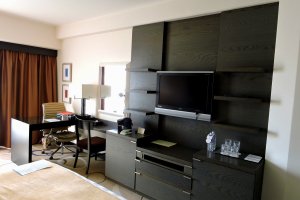 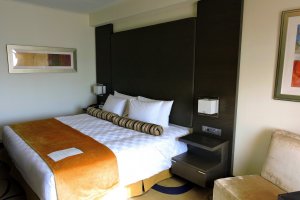 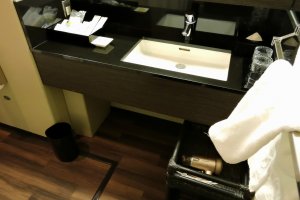 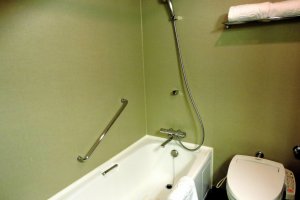