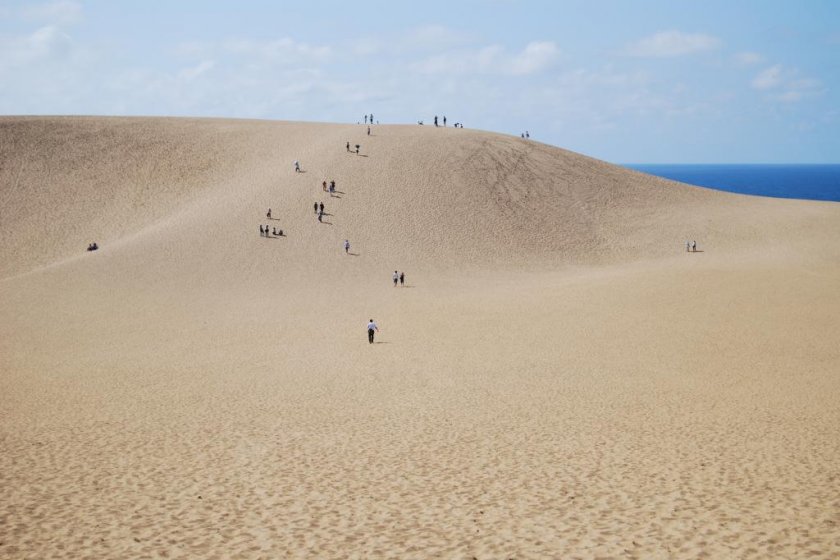 Venturing out into the dunes

If you have never been in a desert, the Tottori Sakyu (Tottori Sand Dunes) will make you feel as if you were transported to a mini version of the world’s famous arid zones. Imagine an over 30 km² (or so they say) expanse of sand, sand, and more sand, stretched out along the ocean in Japan’s San‘in Region, a less traveled area on the northern shoreline of Honshu Island.

I got intrigued by the sight of these sand dunes when I watched the 1964 Japanese movie “The Woman in the Dunes” (Suna no onna) directed by avant-garde film-maker Hiroshi Teshigahara (1927-2001). It turned out that the film director did not have to travel abroad for shooting this art house movie but he just traveled to Tottori Prefecture. You will never know how sand can inspire eroticism until you watch the movie!

While the San’yo Region on the southern shores of Honshu Island lies on the “Golden Route” of tourists traveling from Tokyo via Kyoto to Hiroshima, the San’in Region is often not found on travel itineraries. Shame as there is much to see.

A couple of summers ago I set out to discover this area of Japan. My journey took me first to Tottori City, the capital of Tottori Prefecture, and to the nearby Tottori Sand Dunes, next I hiked up Mt. Daisen (1,729 m), the highest mountain in Japan’s Chugoku Region, and finally I explored the Izumo Taisha in Shimane Prefecture, which is one of Japan’s oldest Shinto shrines. This was a perfect journey combining nature and culture travel.

The Tottori Sand Dunes are quite impressive to look at; conquering them takes some strength. Walking up to the highest peak of the dunes took me a while but coming down was quick as I just followed the example of crowds of young people speed-running down the sandy slopes.

This was great fun and reminded me of my childhood when we rolled down the grassy slopes of some hills. I hadn’t done that for years; never mind age and adult behavior, I greatly enjoyed skidding and stumbling down these vast mountains of sand!

The brave amongst you might want to try out sand-boarding or paragliding down the slopes.

I was so impressed with these sand dunes that I went there twice. My first encounter was in the afternoon when the sun stood still high and it was blazing hot. Walking across the sand builds your muscles but sooner or later you have lots of sand in your sandals and you feel like taking off your shoes. This is not a wise thing to do, as I soon found out; the sand is boiling hot, in summer at least.

Once you have reached the top of the dunes, you feel the cool breeze coming from the sea. This is the Sea of Japan. Its blue waters and crushing waves call you down from the slopes to refresh your feet, or the whole body of you like, in the cool water. I went a little offside and plunged right in. Not many people did so but this opportunity was too good to be missed.

In the evening you can gaze at the most beautiful sunset from the top of the dunes but don’t get caught by nightfall as there is no light out there!

I went back to the dunes in the early morning the next day to enjoy the beautiful wave patterns in the sand created by the wind. At this time of the day the sandy hills are still undisturbed by the footprints of people who walk across the dunes during the day.

There is a Sand Museum too for the curious!

The landscape looks desert-like indeed, just that the ocean is on the other side of the hills! 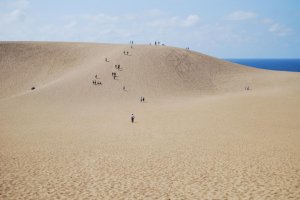 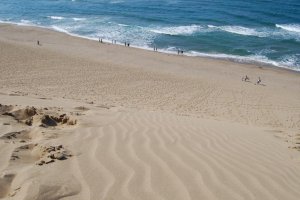 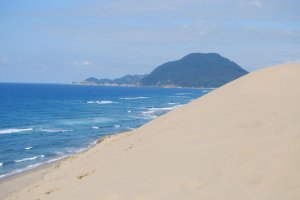 Amber Mezbourian 8 years ago
Hi Alena! Nice article. I want to visit Tottori now - these sand dunes really do look like somewhere in Africa or the Middle East rather than Japan! Are they totally natural or man made?
Reply Show all 0 replies
3 comments in total