A Sacred Mountain in Yamagata and Akita

Mount Chokai is the second highest mountain in Tohoku but the highest is Yamagata and Akita. It has long been venerated as a holy peak by the Shugenko Shinto group. Even before Edo Period, it was considered a holy mountain. It was believed that anyone who climbed it would get some extra protection from the Gods. It was with this in mind that the North path was paved with stones. Thanks to that incredible effort, today, the journey to the top is much easier.

The mountain is an active volcano and last erupted in 1974 and created a new peak then. So, today, it has 2 peaks, the official peak at 2230 meters and the new peak at 2236 meters. There are numerous ways to the top, we chose the North side called Haraikawa. It is about 5 kilometers to the top and perhaps the shortest way.

On the way up, you'll see several beautiful and rare plants, it was my first time to see wild blueberries in Japan. I always thought it was an imported species. We also saw wild raspberries and other edible plants. There are many alpine flowers only found on this mountain.

Before you start, on the north side, is a lodge and campground where you can spend the night. It is a full day's hike, you should start in early morning if you want to get back in daylight. The lodge at the summit was closed this year due to COVID-19. It took us about 4 hours to reach the first summit and almost another hour to the second summit. The weather made the climb difficult, we had very limited visibility, about 10 meters as we got near the top. In fact, we lost the trail at one point.

The trail starts at the Ryugahara Marsh for about 1 kilometer and then enters the forest. At the beginning of the forest is the Ryugahara Shrine. Then the climb starts, fortunately over half of the path is paved with hand cut stones. Even some of the steeper parts have stairs cuts from the rocks. I can't imagine how many years it might have taken to accomplish all that.

At about one third of the way up, we encountered our first snow pack, it was more like ice, Probably it doesn't completely melt in summer. We have to be careful while walking on it, some area can be too thin to support our weight. Also getting on and off is a little more slippery and there is often a gap between the rocks and the snow.

After the first snow patch, there is a refuge called Nanatsugama and a washroom, it's the only one until the top. After that, we entered a small canyon carved in the rock over the millennia. There are some lovely small waterfalls, supposedly there are 7 but we only saw 2. Further up, we encountered the paved trail, this made the climb so much easier. A great thanks to all those who carried all the heavy stones up the mountain.

The last part is loose volcanic rock and kind of slippery, that's where we got lost. It was so foggy that we couldn't see past 10 meters. We didn't know that we were near the first summit until we saw the markers.

The path between the first summit and the second summit is the hardest, we had to go down a steep rocky and loose surface in very low visibility. A chain to guide us made that part easier. Between the two summits are 4 structures including a shrine and a lot of rock walls. To reach the second summit, we have to climb over large boulders and pass through some very narrow passages. Due to the difficult terrain, there is a one way path up and one way down. The space at the top is very limited, probably a maximum of 10 people can fit there. We had to be quick to take pictures and move on, we had just 30 seconds of clear sky to snap a few shots. Also, there was another group of people coming to take pictures. After we returned to the first summit, the sky cleared and we could have a bird's eye view and see how close the second summit is. The descent was in clear sky, we could see how beautiful the mountain is. That is without a doubt the most interesting climb that I have done so far in Japan.

Getting there, there is no direct road to access the lodge. You can take R 108 from either Yurihonjo or Innai, south of Yuzawa. From Innai, turn left at Yashima and take R 58 then look for signs for Mt. Chokai, the road isn't numbered.

From Yurihonjo also, go to Yashima and turn right at R 58 and look for the sign to Mt. Chokai 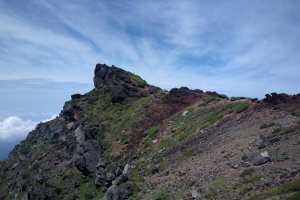 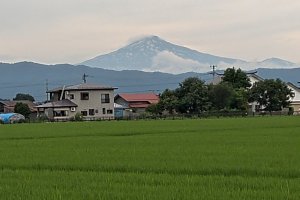 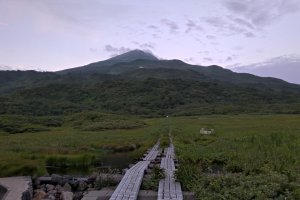 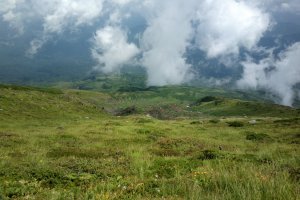 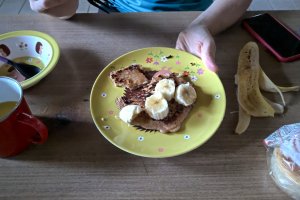 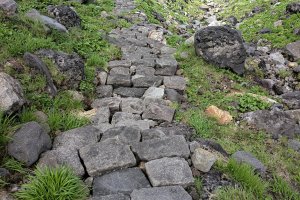 Bonson Lam 2 years ago
Wild blueberries, who would have known! It is great seeing you out hiking and enjoying nature on Mount Chokai.
Reply Show all 0 replies

Sleiman Azizi 2 years ago
Paved with stones... I'm not sure why but that point about the mountain really got my attention. What a curious feature.
Reply Show all 1 replies

Elizabeth S 2 years ago
To think of the labor to move the stones.
Reply
3 comments in total