Enjoy around 10,000 azaleas at this vast urban park

From around mid-April to early May each year, Gunma's Tsutsujigaoka Park in Tatebayashi is filled with color thanks to the 10,000 azalea bushes on the grounds. Breaking it down even further, the azaleas here are from 50 different varieties, including the likes of the purple maiden azalea, the white Ryukyu azalea, and the Asuka River azalea to name just a few.

As is the case with any flower festival, the dates can differ slightly from year to year depending on blooming conditions. As an estimate, last year's event ran from April 10th until May 15th, but do check the official website for a confirmation closer to April.

Tsutsujigaoka Park in Tatebayashi is located around 25 minutes on foot or a five minute cab ride from Tatebayashi Station, served by the Tōbu Isesaki Line, Sano Line, and Koizumi Line.

For those who plan to drive to the park, it's about 5 minutes from the Tatebayashi IC on the Tohoku Expressway. Free parking is available on-site for up to 800 vehicles. 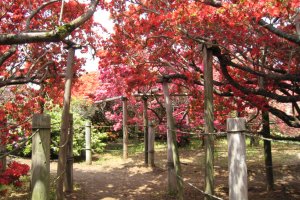 Kim Author 3 months ago
Yes! They grow them on trellises to form an azalea tunnel for people to walk through! :)
Reply