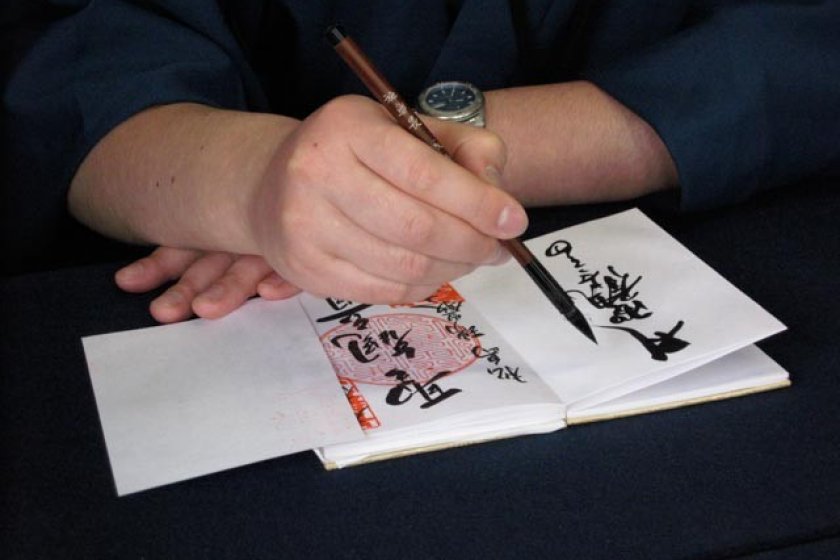 The Goshuinchou: Unique and original gift from Japan

Notice the arm technique by this monk at Asakusa in Tokyo. He supports his writing arm while making sure he does not smear any ink onto stamps from other temples

Here is a souvenir idea from Japan that is not plastic sushi or a Hello Kitty rice cooker. The Japanese temple red-stamp notebook is a small book that you can bring to the thousands of shrines and temples around Japan. It is called the "Goshuinchou". Its literal translation is the "Honorable red-stamp notebook". With a name like that, it actually makes stamp collecting sound awesome.

Here is how it works;

Upon your first visit to a temple in Japan, you can buy a Goshuin notebook. You then hand your new book to the friendly monk at the temple. The monk uses black ink to hand-write the name and date using traditional Japanese calligraphy. Afterwards he stamps your book with a large red stamp that is unique to that specific temple. You pay (donate) a few dollars to the temple (usually ¥200-¥500) and then you’re given back the notebook with its beautiful black calligraphy and vermilion red ink. At the next temple you don’t buy a new book, you give them the one that you already have. The monk at the new temple will place his artwork directly next to the ones that you have already received. By the end of your trip you have this collection of original artwork that literally traces your journey through Japan.

Everyone’s notebook ends up being different. Aside from the names and dates being distinct, each monk and temple has a different style. The order in which you go to various temples also makes all the books look different. The best part is that the book unfolds like an accordion. Meaning it opens up like a folded scroll so that all the pages can be revealed at one time (see photo below). I have talked to people who have actually framed the panoramic calligraphy to put on their walls.

Once you develop the affinity for bringing your Goshuin notebook with you every time you travel in Japan, you begin to develop a keen eye for finding red stamps. You'll start to notice stamps everywhere you go, in train stations and highway rest areas. Even places like the Tokyo Gyoza Museum and the Nagoya Aquarium. In Japan, stamps and travel go together like sushi and soy sauce. It's not just a marketing ploy; Stamps and traveling are deeply rooted in the history and culture of Japan.

Its origins lie in Japan’s history of going on pilgrimages to sacred and holy sites. These may be sacred natural destinations like Mt. Fuji and Mt. Koya. Or they may be early single-site holy places like Ise Shrine. This developed into "multi-site circuits”, like the 88 Holy sites of Shikoku and the 33 sites of Saigoku, where a group of temples are all devoted to the same thing. Since no one temple is more important than the other, all of them must be visited.

Even back as far as 750 AD, the Japanese were trying to keep track of what temples they had been to. Thus, the original motivation for the temple notebook. It is said that back in the old days, the temple priest would sign your book to show that you had been there. If he was away, you would have to "settle” for the stamp. Stamps and signatures became more elaborate as time went on, and they developed into what you see today.

At some of the larger temples, don't be surprised if you hand them your notebook and they give you a “number”. They are so busy, and have so many notebooks, that you’ll have to pick it up on your way out. It’s like a Goshuin coat check.

The larger temples also have upped the ante by offering a unique and more expensive notebook. Some of them are beautifully embroidered with an image of the temple on the outside. My personal favorite being the very rare notebook you can purchase in Koya-san; where the notebook covers are made from the wood of the sacred Kii Mountain Range and Koya forest where the temple resides.

I’m not trying to talk you out of getting plastic sushi or any Hello Kitty related merchandise. I’m just saying, in addition to your other “cool” souvenirs, make sure you pick up and carry around the Goshuinchou temple stamp book. It makes an excellent inexpensive keepsake that gets more beautiful over time. 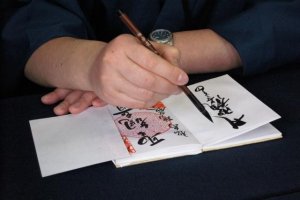 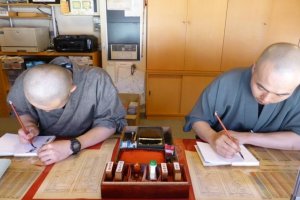 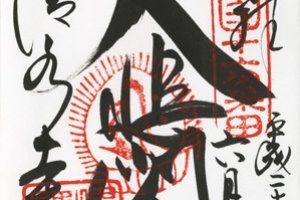 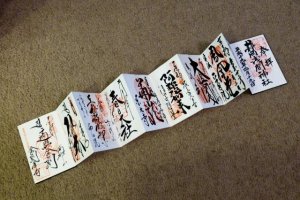 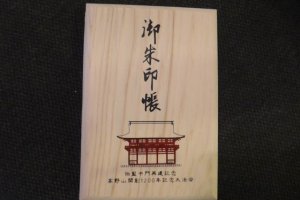 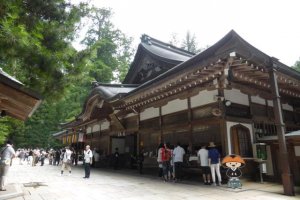 Kim 3 years ago
Even though I've been living here almost 6 years now, I only picked up one of these books within the last year. It's already become one of my most treasured possessions though!
Reply Show all 0 replies

Elizabeth S 4 years ago
Great detailed description of how you use goshuin.

Note that you don’t have to commit to a book. I was at Ryosenji in Shimoda City where the monks will write goshuin on quality paper they provide. It looks great framed.
Reply Show all 0 replies

Milena Dokim 4 years ago
Spend 200-500Yen for my BAD handwrit? Noo~ But deff need to see that too.
Reply Show all 0 replies

Guillaume Doré 6 years ago
I also love these stamps. If you are doing one of the pilgrimage or course, it's sometime possible to get a scroll or board where you can get them all in a form that is easier to display or hang on the wall.
I also heard that priest could refuse to write in your book if you used it for something else, like collection rubber stamps from train stations and other attractions, or that they can refuse to write it on something else, like scarp paper. But at the price of the book and stamps, I don't understand why you would do that. Just bring a plain notebook for normal stamps, and get a nice goshuin book to get you goshuin printed on proper paper for it.
Reply Show all 0 replies
5 comments in total