All Nippon Airways (ANA) just made it so much easier to fly from Sydney to Tokyo, with double daily flights between the largest cities in Australia and Japan commencing from 29 March 2020.

Compared with Qantas and Japan Airlines (JAL), ANA is a relatively new entrant to the Australia- Japan market, even though it had commenced daily services from Sydney in 2015 and from Perth in 2019.

From humble beginnings ANA has leap frogged JAL and Qantas as the only double daily service, while Qantas and JAL will continue daily services from Sydney to Tokyo.

The second daily flight is scheduled for a late morning departure, with enough time for passengers from other airports in Australia, New Zealand and the South Pacific to fly into Sydney for the day flight onto Tokyo Haneda.

Another benefit of a double daily service, is that if you miss your flight for any reason, you only need to wait 12 hours instead of 24 hours for the next flight (subject to availability of seats and the conditions on your ticket). Japanese carriers like ANA particularly stand out with their service and care when things go wrong. Once I had missed a connecting flight and they went out of their way with arranging overnight accommodation, even though they didn't need to do it. A further benefit with flying with Japanese carriers is that you feel that you are already on your holiday to Japan, the moment you board. From their well designed Japanese menu to the range of Japanese TV, movie and music channels, there is something to suit people of all ages.

While passengers usually need to pay a premium for direct services compared with indirect services via Asia, there are selective sales for this service to Haneda, with return economy fares starting from $720. Passengers can choose from day or night departures from both Sydney and Tokyo, offering unprecedented choice for this route. As the day flight was only recently announced, expect to pay less for the day flight option in the short term.

This second day time service arrives in Tokyo Haneda at 8:30pm, allowing passengers time to see the sights, have supper in Shibuya or relax for a good night’s sleep in Tokyo. From Haneda at 8:30pm there are connections by bullet train to Osaka, Nagano, alternatively overnight for next day connections to Sapporo or Okinawa. Near Haneda there are a number of public baths to relax and enjoy Japanese culture before starting afresh the next morning.

Haneda’s increasingly attractive connectivity for international flights provide another opportunity for this flight. A passenger taking the overnight service from Sydney will arrive in Haneda before 6am, allowing a quick connection into ANA’s global network in North America and Europe. For passengers flying to other domestic cities, ANA has the most comprehensive domestic network from Tokyo Haneda. In the future, there are plans to co-locate some domestic and international flights from Haneda's Terminal 2, making connections even easier.

All Nippon Airlines (ANA) has also announced a codeshare arrangement with Virgin Australia from the second half of 2020 for this flight as well as selected domestic flights in Japan. Elite members of the Virgin Australia Velocity program can then earn points on these flights as well as access ANA elite privileges, such as lounge access for eligible members.

Sydney is less than 10 hours to Tokyo Haneda airport on the double daily service. From Haneda Airport it is less than 60 minutes to most heritage or Tokyo Bay venues for the 2020 Summer Olympics, by monorail or train. 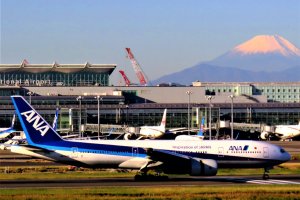 Bonson Lam Author 2 years ago
It should be noted that while the double daily flights have been postponed in the March/ April period, ANA is still operating between Sydney and Tokyo Haneda with the existing evening services.
Reply Show all 0 replies

Sleiman Azizi 2 years ago
ANA is an excellent airline. I can personally vouch for them as we fly them all the time. In fact, I'll be flying out tonight with ANA....
Reply Show all 5 replies

Bonson Lam Author 2 years ago
Hi Sleiman, that is fantastic! Enjoy your flight through the starry skies. Maybe even show them this article!
Reply

Elena Lisina 2 years ago
Will miss you!
Reply

Sleiman Azizi 2 years ago
Very, very short trip but I'm sure I can squeeze in a ramen by the end..
Reply

Bonson Lam Author 2 years ago
Gotta have some ramen!
Reply
7 comments in total