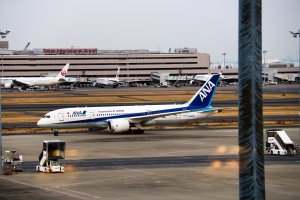 It is the main airport of the two major Japanese domestic airlines Japan Airlines (Terminal 1) and All Nippon Airways (Terminal 2) as well as Air Do, Skymark Airlines, Solaseed Air and StarFlyer. It is located in Ōta, the largest of the 23 districts in Tokyo Prefecture, just 15 kilometers south of Tokyo Station.

In 2020, Haneda was named the second best airport by Skytrax after Changi Airport in Singapore and is the cleanest and best domestic airport in the world.

Haneda is a short ride from Tokyo’s Shinagawa Station, a main transportation hub for both the shinkansen and the local metro and JR train lines. It is also connected to JR Hamamatsucho Station by the Tokyo Monorail, allowing for passengers to transit between the city and the airport in as little as 15 minutes. For passengers needing to connect to Narita Airport for an international flight or long-haul domestic route (ie Okinawa), a limousine bus frequently makes the journey between the two hubs.

Got some time, but don't want to fly? Haneda Airport in Tokyo has very impressive shopping and dining complexes, and the airport..

Tokyo Haneda Airport is the only airport within Tokyo Prefecture, and has an increasing number of visitors and attractions emerging..

Come and witness the impressive transformation that Tokyo’s Haneda Airport has undergone in the last few years. As you enter i..

For anyone who likes planes, trains or automobiles; then Haneda Airport’s observation deck is the place to come

For any true ‘plane spotters’ out there, a visit to Tokyo International Airport, (Haneda) isn’t complete without visiting the ..

Feel the good old days of Japan at Edo-koji Street of Haneda Airport!

How to Get From Haneda to Central Tokyo

Situated conveniently in Tokyo’s Ota City, you can travel from Haneda Airport on to popular destinations such as Shibuya, Asak..

Direct services from Brisbane to Tokyo Haneda commence in 2020, with business and economy class seats on sale, and a proposed code-share..

All Nippon Airways (ANA) just made it so much easier to fly from Sydney to Tokyo, with double daily flights between the largest..

Setagay Ramen is located on the 4F of Haneda Airport International Terminal. Clean, neat and tasty, the store is famous for its..

Rokurinsha is a tsukemen dipping ramen bar. Located in the departure lobby of Haneda Airport International Terminal, the tsukemen..

Haneda Airport is one of the world's busiest airports. The current world health concerns have seen a dramatic decrease in visitors..

Haneda Airport to Tokyo and Narita

An insider guide to the best tips to get to and from Haneda Airport with the minimum of stress and fuss from Haneda HND to Tok..

HOTEL MYSTAYS Haneda in Tokyo is located very close to Haneda airport making it extremely convenient for those arriving late i..

Much like Kyoto's famed Fushimi Inari Taisha, Anamori Inari Shrine is an albeit smaller shrine in Ota, Tokyo dedicated to the Inari fox gods. Th..

Kawasaki Daishi is the popular name of Heiken-ji, a Buddhist temple in Kawasaki, Japan. Founded in 1128, it is the headquarters of the Chizan sect o..

This land of leisure is full of fun amusement facilities complete with a variety of restaurants. In addition to a natural hot spring facility for a day..