Still one of the world's best airports

I am an unabashed fan of Haneda Airport. I love its design, it ambience and its insistence on being passenger friendly in almost every way. Haneda is simply a great airport and visiting leaves me feeling almost giddy, as if I had travelled the world without actually stepping out onto the streets.

This time, though, the arrival lobby greeted me with an empty vessel, a ghost town if there ever was one. Staff seemed to outnumber visitors and a general hush had enveloped the airport with the absence of passengers. The current health concerns that have spread around the world were never more apparent to me than with the silence of Haneda Airport.

Despite all of this, Haneda's style is still very much in evidence. The massive scale-built replica of Japan's famous Nihonbashi Bridge is naturally a focal point and has captured my attention since the first time I had visited. Half the size of the original, the bridge is replete with great views over the airport and features folding screen artwork displaying the old city of Edo and its many districts.

A modern take on a traditional market experience, the airport's Edo Koji shopping alley is filled with souvenir stores and places to dine. A stroll here always sees me question whether my budget is too low... but I can at least still wander the almost-alleys and admire what was on offer.

A visual feast, if not for the belly then certainly for the eyes is the Edo Butai, a stage featuring unique aspects of traditional Japanese culture and arts. Decorative in the fullest, the stage offers visitors an aesthetic respite from the business of travelling and like the Haneda Nihonbashi Bridge, is a focal point of the airport.

Being surrounded by challenging times may have changed the atmosphere of my favourite airport but it certainly didn't dampen my respect for it. Once the current climate blows over - and it will - Haneda Airport will continue on being one of the best airports in the world. 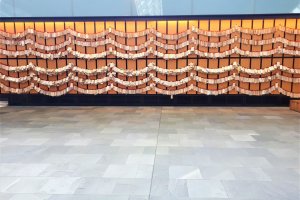 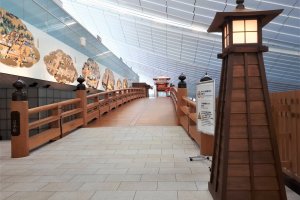 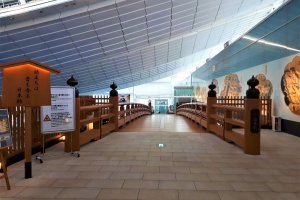 Sander van Werkhoven 2 years ago
Weird to see such a big airport almost deserted. But I'm guilty too, I would have had a flight from Yonago to Haneda this Friday, but I first rescheduled and now have completely cancelled my trip :-(

But Haneda is indeed a great airport, and the greatest benefit of all is its proximity to central Tokyo. Too bad most international flights still use Narita, including KLM which is usually the most practical airline for me. Air France does use Haneda, but then you'll have a transfer at CDG, which seems to be the polar opposite of Haneda......
Reply Show all 3 replies

Sleiman Azizi Author 2 years ago
It's proximity to central Tokyo is such a huge plus that I often wonder what the future has in store for Narita.
Reply

Sander van Werkhoven 2 years ago
As long as Haneda can't possibly handle all of the international flights, Narita will be safe, especially with the ever increasing number of foreign visitors. And they are currently even expanding with a third runway. I guess one thing they could do is increase domestic flights to become more of a hub. Having to transfer to Haneda for most connecting flights is a much bigger hassle than its distance to central Tokyo.
Reply

Kim 2 years ago
Wow - it's deserted! A nice opportunity to soak up the lovely design without the crowds!
Reply Show all 2 replies

Sleiman Azizi Author 2 years ago
Finding a positive out of a negative.
Reply

Kim 2 years ago
Yes, in the current climate it's a necessity to look on the bright side when possible!
Reply

Elena Lisina 2 years ago
Haneda is amazing! My flights were always to/from Narita, but the forthcoming trip is to Haneda, if it happens. :(
Reply Show all 1 replies

Sleiman Azizi Author 2 years ago
It's a great airport. It really is
Reply
9 comments in total