Virgin Australia lights up the skies

Virgin Australia is creating a world first for Brisbane and Queensland, by launching direct flights to Tokyo Haneda airport, the quickest way to the Japanese capital from 14 June 2020.

Virgin Australia is a new entrant to the Australia to Japan market, even though it had previously sold seats on Singapore (SQ) operated flights on a code-share ticket. These direct flights would save over 10 hours on an indirect flight via Singapore.

Virgin Australia’s brand awareness is much higher in Australia than Japan, and so is expected to have a much higher percentage of Australian passengers on its initial flights. Expect to hear a lot more Australian accents on these flights, even though Virgin Australia has been in the process of hiring Japanese speaking flight attendants this year. Of course, if you prefer to put your headphones on, the in-flight entertainment and Wi-Fi offering is excellent, as it has operated long haul services since 27 February 2009.

It is currently scheduled for a late morning departure from Brisbane, with enough time for passengers from other airports in Australia, New Zealand and the South Pacific to fly into Brisbane in the early morning to connect with this Brisbane Haneda flight.

Prior to Virgin Australia’s entry, Brisbane to Tokyo was only operated by Qantas with a Narita service. While passengers usually need to pay a premium for direct services compared with indirect services via Asia, there are selective sales for this service to Haneda, with return economy fares starting from $689.

This service arrives in Tokyo Haneda at 8pm, allowing passengers time to see the sights, have supper in Shibuya or relax for a good night’s sleep in Tokyo. From Haneda at 8pm there are connections by bullet train to Osaka, Nagano, alternatively overnight for next day connections to Sapporo or Okinawa. Near Haneda there are a number of public baths to relax and enjoy Japanese culture before starting afresh the next morning.

Haneda’s increasingly attractive connectivity for international flights provide another opportunity for this flight. Virgin Atlantic for example, used to operate from London to Narita. If its bid for a London to Haneda slot is successful, then it could connect with Virgin Australia’s Brisbane service. It is shorter to fly from Brisbane to London via Tokyo, compared to Singapore and so a Virgin operated flight from Brisbane to London could be attractive.

Virgin Australia has also announced a code share arrangement with All Nippon Airlines (ANA) from the second half of 2020 for this flight as well as selected domestic flights in Japan. Elite members of the Virgin Australia Velocity program can then earn points on these flights as well as access ANA elite privileges, such as lounge access for eligible members.

Brisbane is less than 10 hours to Tokyo Haneda airport on the direct Virgin Australia service. From Haneda Airport it is less than 60 minutes to most heritage or Tokyo Bay venues for the 2020 Summer Olympics, by monorail or train. 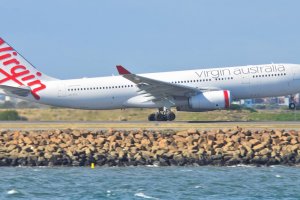 Kim 10 months ago
More and more routes opening up for Aussies, it seems - great!
Reply Show all 3 replies

Bonson Lam Author 10 months ago
Definitely spoilt for choice with Tokyo, with both Brisbane and Melbourne having flights to both Haneda and Narita from the end of March!
Reply

Kim 10 months ago
For sure! And I recall your other piece about direct flights from Perth to Tokyo on ANA (https://en.japantravel.com/chiba/fly-direct-from-perth-to-tokyo/55152). Fantastic all around!
Reply

Bonson Lam Author 10 months ago
Thank you for remembering. Today (7 March) Virgin is offering return fares from Sydney to Haneda for $616 return in May and June, and $659 from Melbourne, both via Brisbane. That is pretty good value as I only bought a Brisbane to Kumamoto return ticket for $1530 the other week.

Bonson Lam Author 10 months ago
Great to hear that you are a fan. Virgin is quite creative and customer focused when it comes to innovations, for example "parental leave" for parents with elite status where they can keep their status for another year while they stop flying to look after kids, female only bathrooms on certain aircraft, plus pooling of points for family members. Hope you can try their service one day.
Reply

Sleiman Azizi 10 months ago
Haneda Airport is great. Being able to get there is even better.
Reply Show all 2 replies

Bonson Lam Author 10 months ago
Absolutely! Also the rail and monorail frequencies from Haneda is a lot more frequent than Narita, making it really easy.
Reply

Sleiman Azizi 10 months ago
Writing seems to be on the wall.
Reply
9 comments in total