Japan is very much in tune with the seasons. Festivals, events, food, and apparel are indicators of seasons and seasonality. From the ehomaki eaten at setsubun in February to the vibrant and patterned yukata of summer, Japanese life reflects spring, summer, fall, and winter. At The Tokyo EDITION, Toranomon, one of Tokyo's newest and most elegant hotels, it's possible for visitors to experience afternoon tea with a sakura theme (running until April 4) that reflects the cherry blossom season which is currently in full bloom.

The Tokyo EDITION is the latest development to open in the burgeoning Toranomon district of the capital city. Alongside other luxury hotels and projects soon to open, it's becoming a neighborhood to watch. And with a brand new station, on the Hibiya Line, and nearby proximity to Kamiyacho Station, it's easier than ever to stroll around the wide boulevards and cafe-lined streets. The Tokyo EDITION has introduced a lovely seasonal afternoon tea menu open to the public. It's a celebration of British-style custom and Japanese culinary invention. Cucumber crunch sandwiches, roasted chicken tartlet, smoked salmon mousse with caviar, a selection of scones, and chocolate (the standout being a scrumptious sakura creme brulee and hazelnut cookie) are a playful celebration of season and decadence. It's a gorgeous afternoon set and is delicately paired with a comprehensive selection of tea and coffee.

The hotel itself, designed in collaboration with superstar Japanese architect Kengo Kuma, is a stunning homage to Japanese Buddhist temples' structure, purpose, and organization. According to the EDITION group, "The Tokyo EDITION, Toranomon’s two-story lobby, over 450ft (140m) in the sky, is a centralized space that operates and functions not only as a new and modern gathering place, but is also meant to facilitate and encourage communal and social interaction in all of its forms."

The sumptuous and lush lobby, wood-paneled hallways reminiscent of a Kyoto machiya, or the interior corridors of a Zen temple are welcoming and stylish. The interior reflects the hotel's attention to detail and respect for Japanese culture. The rooms available are equally elegant and sophisticated, giving guests plenty of room and outstanding views of the majestic Tokyo cityscape and iconic Tokyo Tower, which stands resplendently nearby.

The 206-room hotel’s public space features over 10 distinct entertaining and working spaces to suit a plethora of moods and atmospheres. The restaurants, bars, and entertainment areas are a pleasing cacophony of black, blue, and jade inspired by the precious stones and extremely rare elements—sapphire, Japanese jade, and gold. Throughout the spaces, materials such as walnut, oak, bronze, travertine, glass, and silk are juxtaposed with yamato-bari, a traditional Japanese wood cladding, and exotic greenery to create an eclectic mix of elements that cannot be categorized as one type of design or look. However, there is a clear reverence to Japanese culture in the most subtle of ways.

From the seasonal menus, the first-grade dining options at The Blue Room restaurant spearheaded by Michelin-starred Tom Aikens and the Kengo Kuma architectural touches, The Tokyo EDITION should be next on your list of spaces to experience.

I'm currently content manager at Japan Travel. I worked as editor-in-chief of Metropolis magazine and writer and contributing editor at The Japan Times, Tokyo Weekender, Stylus, Tokyo Fashion, Time Out Tokyo and many other publications in Japan and overseas. 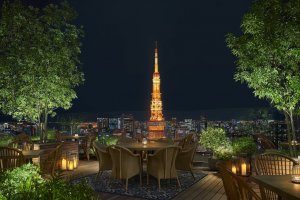 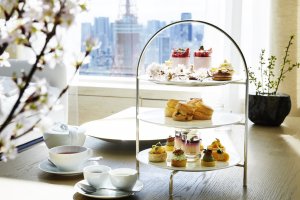 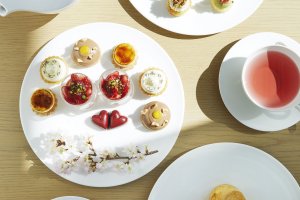 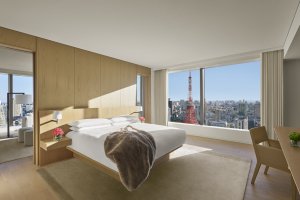 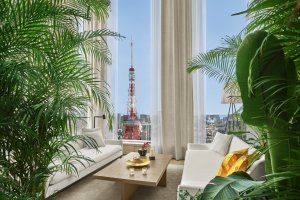 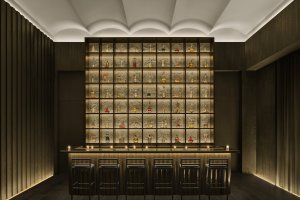 Sherilyn Siy 4 months ago
I was just telling a friend we should go for high tea. Thanks for the recommendation!
Reply Show all 0 replies

Sleiman Azizi 4 months ago
Toranomon is bustling. As for the hotel, the room decor looks understated. I like it.
Reply Show all 0 replies

Kim 4 months ago
What a wonderful view!
Reply Show all 0 replies