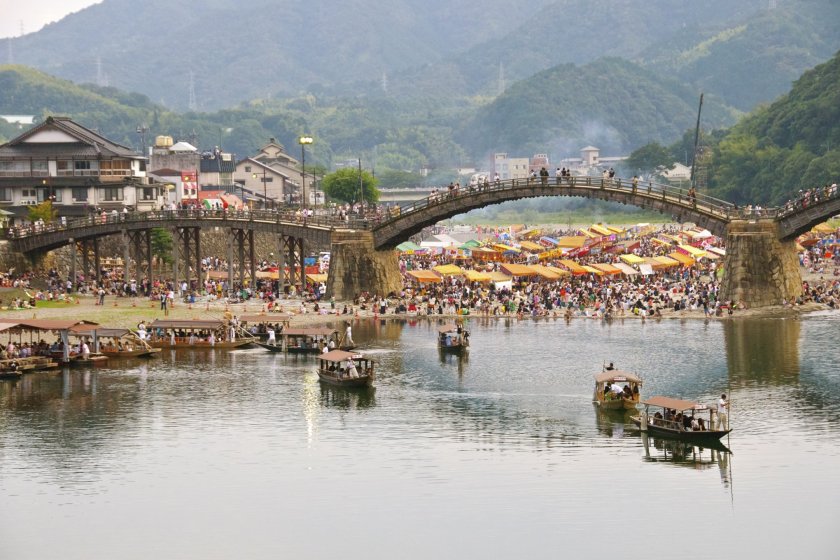 Daytime activities on the river before the fireworks (Photo: GetHiroshima)

Every year in the city of Iwakuni, Yamaguchi the location around the beautiful humped bridge of Kintaikyo plays hosts to a fantastic fireworks “taikai” festival at the beginning of August each year. Most people take food and drinks and make a day of picnicking, riding boats and splashing in the river.

There are typical Japanese festival stalls selling food and drinks, a taiko drum performance as well 90 minutes of beautiful fireworks to enjoy from 8-9:30 pm.

I had a couple of hours to walk around the festival and snap a few shots while people were picnicking and enjoying the day out. It was really humid and the occasional light showers were very welcome. Most people were sitting on their mats chatting and fanning themselves waiting for the evening entertainment to start.

Once I sat down on a grassy patch near the traffic bridge (where all the photographers had set up their tripods), I enjoyed watching the sightseeing boats glide up and down the river.

At dusk the festival stalls and stage near the Kintaikyo bridge seemed to glow with activity as the Taiko drummers performed and preparations for the fireworks began. On our end of the river, the cormorant fishers in traditional costume went by- the birds working hard catching fish in the light of the burning bundles attached to the bow of the boat.

The firework festival was actually a ‘taikai’ competition between companies and organisations that sponsored the event. In Japanese, they would announce how much was spent on each display and the name of the company as well as a little advertising before and after each bout of fireworks. Sometimes they would announce a delay as they waited for the smoke to clear before the next segment of fireworks would begin.

Wouldn't it be great to see the MCAS Iwakuni marine base sponsor their own section of fireworks display someday- this would be a nice international friendship gesture. There were a lot of American residents of the base enjoying the festival.

There was a very friendly, international vibe at the Kintaikyo festival, it’s a beautiful place to enjoy such a spectacular summer festival.

It's free to enjoy the festival and costs only a few hundred yen if you want to walk across the famous bridge. 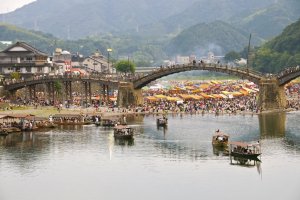 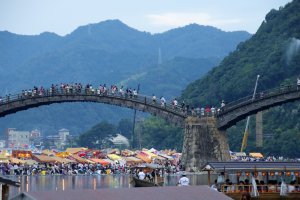 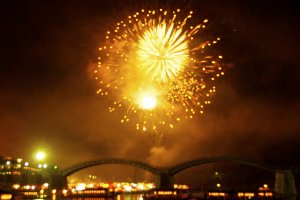