Find out what are the best places to visit — in and out of Tokyo!

First time in Japan? Tokyo, Japan's dynamic capital city, is probably the first you'd visit. Whether you're a fan of Japanese culture, food, or anime, there is always something for you in Tokyo.

With so much to do and only so little time, it might be daunting to decide where to best spend your holiday here. So if you're short on time — we helped pick out the "Top 3s" to visit, both in and out (from) Tokyo!

Located north of bustling Ueno Park, Nezu Shrine is a hidden enclave for locals and those in the know. One of the oldest shrines in Tokyo, this small shrine retains its Edo-period structures and is situated atop a hill on which blue and purple azaleas bloom during April and May. The Otome Inari Jinja located within the Nezu Shrine grounds offers a Kyoto-esque sight of a tunnel of red torii gates.

Hie Shrine in Akasaka is located amongst busy commercial districts, a strange area for a place of worship to be situated. However, this makes the small shrine less crowded with tourists, offering a more authentic experience of visiting a local shrine. Like the previous two, Hie Shrine also has a slew of torii gates lined up in a tunnel—no need to travel all the way to Kyoto for it.

Try these easily accessible escapes from the metropolis with minimal travel fuss — suitable for a day-trip or overnight weekend stay.

Known as “Little Edo”, Kawagoe is barely an hour away from Tokyo via local trains. This charming, historic town is known for its Edo-period structures and its Candy Alley—streets lined with traditional confectioneries. Here, you’ll also find Kawagoe Castle, Kita-in Temple, Toshogu Shrine, and even a traditional Starbucks outlet.

A secret to none, Kamakura is a popular destination for daytrippers due to its ease of access from Tokyo and its iconic Great Buddha statue. Only an hour away from central Tokyo, Kamakura is home to shrines, temples, cherry blossoms, hydrangeas, and even beaches. A trip to Kamakura can be easily extended to a weekend by staying overnight and exploring nearby Enoshima Island as well.

For those who love hiking, Mount Takao is an excellent choice—with multiple trails and ropeway options, this mountain caters to hikers of all skill levels. From Shinjuku, Mount Takao is less than an hour away via local train. Visit during spring or autumn to enjoy viewing the mountaintop cherry blossoms or autumn foliage.

One of the most popular franchises in the world, Pokemon is no stranger to us. While the series has had several temporary pop-up cafes, the Pokemon Cafe Nihonbashi is its first permanent outlet. The cafe switches up its menu offerings every month or so to match the changing seasons and new game releases, not forgetting its cafe-exclusive merchandise. It makes the perfect trip after visiting a Tokyo-based Pokemon Center.

Moomin, although a Finnish cartoon character, is beloved in Japan. Its popularity has spawned several Moomin-related franchises, but the outlet at Tokyo Skytree Town is one of the two permanent cafes in Tokyo. Unlike most cafes, you might want to consider ditching your friends and going alone—for the chance to get seated with an adorable life-sized Moomin plush. Its location at Tokyo Skytree also makes it convenient to visit the Kirby Cafe and Pokemon Center Tokyo Skytree store as well.

The Kirby Cafe opened its doors to eager fans in December 2019, and is located on the 4th floor of Tokyo Skytree Town Solamachi. Visiting the Kirby Cafe is an experience in itself, with vibrant and whimsical decor covering the entire area. This cafe boasts a larger menu than the previous two, with a large assortment of savory and sweet dishes that are both photogenic and delicious. Of course, cafe-exclusive merchandise is also available for purchase—provided you’re able to secure a cafe reservation in advance!

Fans of the Persona 5 game would find the streets of Sangenjaya almost nostalgic. The game’s “Yongenjaya” area was based on Sangenjaya; a hip, local district full of pubs and great coffee places. The station’s yellow mosaic walls are almost identical to the ones seen in-game, as well as the protagonist’s home—LeBlanc, the hidden sento with the ¥100 vending machine outside, and not forgetting the iconic coin laundry machines. Sangenjaya is a haven for those on their Persona 5 pilgrimage, but let’s not forget that this is still a residential district and not a tourist attraction.

Kanda Myojin Shrine is unique for being a “tech shrine”: its version of ema good luck talismans are said to protect the fate of your electronic goods. The wooden tablets, or ema, here at Kanda Shrine are often decorated with characters from popular anime "Love Live"—as the shrine was featured as a significant place throughout the show. Its close proximity to Akihabara makes it an interesting site to visit along your way to the anime lover's shopping haven.

Makoto Shinkai’s 2016 international hit film Your Name has multiple “real-life” locations spread out across Tokyo. However, the staircase at Suga Shrine is undoubtedly the most significant. The film’s pivotal scene where our two protagonists meet again happened on the narrow steps leading to Suga Shrine. While many fans of the film make their trip here for this spot, make sure to pay the shrine a visit as well—Suga Shrine is the Yotsuya area’s guardian shrine since its establishment in the early Edo period.

Nightlife in Shinjuku wouldn’t be complete without a trip to Golden Gai. Golden Gai is a maze of small pubs and eateries, or izakaya, where locals and tourists alike go to have a drink. The most touristy of the three yokocho listed here, Golden Gai's bars might have some English signage, but it's still best to come equipped with basic ordering-Japanese (or a Japanese friend)!

Just minutes from Ebisu Station are rows of small food stalls, their tiny outdoor seating areas packed with locals seeking to wind down after a day’s hard work. Ebisu Yokocho is mostly frequented by locals, loved for its variety of food options clustered within a small convenient location.

One of Tokyo’s largest and most popular festivals—Sanja Matsuri is held in Asakusa, during the third weekend of May every year. If you want to experience an authentic Japanese festival and only have time for one, make sure to visit Tokyo during May. The festival grounds encompass the majestic Sensoji Temple as well as rows of local food stalls to sate your hunger throughout the day. Over 100 mikoshi (portable shrines) are paraded around the area, to the delight of millions of excited festival-goers. Sanja Matsuri is predictably crowded each year, so take care if going with small children or the elderly.

Sanja Matsuri is one of Tokyo's biggest festivals and features over 100 mikoshi floats paraded through the grounds of Senso-ji..

Fireworks have always been an integral part of Japanese summers. The Sumidagawa Fireworks Festival is one of Tokyo’s biggest and oldest festivals, dating back to the Edo period. Brilliant fireworks displays can be seen from either side of the Sumida River, where rows of food and traditional game stalls are set up, adding to the festive atmosphere. Locals come dressed up in yukata (summer robes) to beat the summer heat and celebrate the festival on every last Saturday of July.

The Sumidagawa Fireworks Festival around the Tokyo Skytree is one of Japan's major summer fireworks displays, held each year..

During the last weekend of August, over 10,000 dancers and performers gather in Koenji for the annual Awa Odori Festival. One of the more unique festivals, the Awa Odori celebrates summer with vibrant song and dance, with the performers decked out in colorful costumes. Koenji itself also has much to offer, being known as one of the “cooler” yet laid-back neighborhoods in Tokyo, so make sure to check out the area after enjoying the festival.

This dance festival is held annually on the last or second to last weekend of August. Dancing lasts exactly 3 hours, but festivities..

3 Places to See Snow near Tokyo

One of the most well-known winter escapes for Tokyoites is the GALA Yuzawa Ski Resort. Located within an hour’s bullet train ride from Tokyo, this resort is the only one with a shinkansen station located within the resort premises itself. With multiple ski slopes catering to skiers of different skill levels and thick snow cover, GALA Yuzawa is a great day or weekend trip for those wanting to see a snowy winter landscape while in Tokyo. For those without rail passes, multiple highway bus companies also operate Tokyo-Yuzawa routes offering competitive prices. The trip usually takes around three hours one-way.

For travelers who wish to see a stunning Japanese snowscape—head to Kusatsu Onsen. Located in Gunma Prefecture, Kusatsu Onsen is one of Japan’s top three hot spring resorts. The natural sulfuric hot spring water is renowned for its emerald-green color and therapeutic effects. In winter, bathing in an outdoor rotenburo surrounded by snow-capped traditional buildings is sure to be the highlight of your trip. From Tokyo, Kusatsu Onsen is accessible via a two-and-a-half-hour journey combining a bullet train to Karuizawa and a direct bus to the onsen village. Alternatively, regular highway buses travel from Tokyo to Kusatsu Onsen in about four hours.

An open secret among the locals, Karuizawa is a haven for those wishing to escape the summer heat as well as savor the best of winter by hitting the slopes. The upscale mountainside resort town is home to Karuizawa Prince Hotel Resort—a ski resort that’s a mere 10-minute walk from Karuizawa Station. The family-friendly resort also includes hotels and a shopping complex, making it a great weekend getaway. To get here, simply take the Joetsu Shinkansen from Tokyo to Karuizawa and you’ll be in a winter wonderland in under an hour. 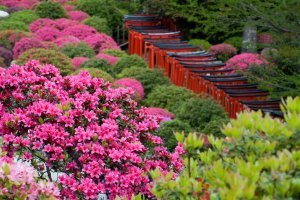 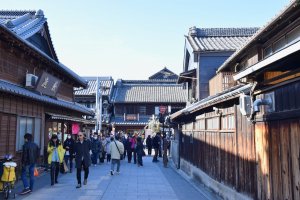 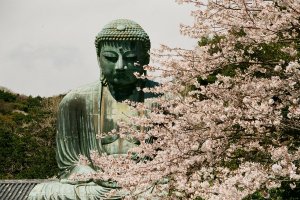 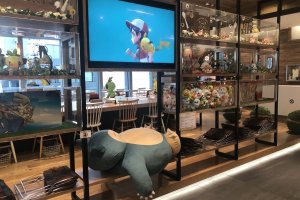 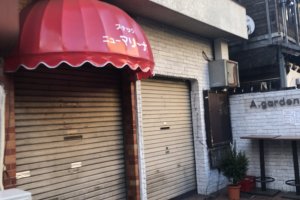 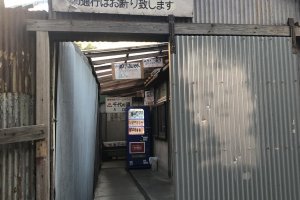 Nga Nguyễn 6 months ago
An extremely detailed article, it makes my list of must-visit spots when coming to Japan longer! Thank you so much!

Justin Velgus a year ago
The 3 anime locations and 3 drinking alleys were fun additions!
Reply Show all 0 replies

Luca De Pasquale 2 years ago
Ufff so much to see ! All the places listed are very high quality and as a Tokyoite mysel I cannot agree more with your picks !
Reply Show all 0 replies