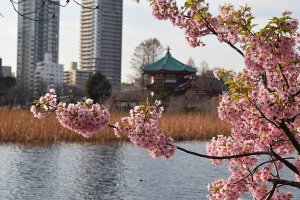 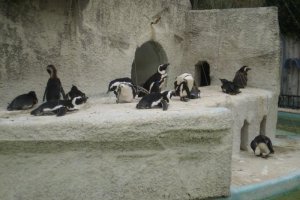 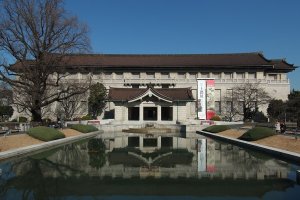 The Ueno Park (Ueno Koen) in the Taito district of Tokyo is a public park and with more than 10 million visitors annually the most popular city park in Japan. It includes the area of ​​the Kaneiji Temple, which was built there to symbolically protect Edo Castle, which is in the Boshin Civil war in 1868 was largely destroyed.

In the southern part of the park is the Shinobazu pond, which is based on Lake Biwa near Kyoto and in the middle of which is the Bentendo temple hall. The Kiyomizu Kannon Temple - also based on its model in Kyoto - and a Toshogu shrine dedicated to the Tokugawa clan were also built on the large area.

At the same time, the Ueno Park with its more than 1000 cherry trees is a popular destination, especially in spring, to admire the cherry blossoms while doing a hanami and picnic under the trees.

First opened in 1882, Ueno Zoo is Japan’s oldest zoo. The 14.3-hectare complex is home to over 3,000 animals of 400 different species. Notable animals in the zoo include the Giant Panda, Gorilla, and Bengal Tiger. The Ueno Zoo is an easy 5-minute walk from the JR Ueno Station Park Exit.

Established in 1872, the Tokyo National Museum is Japan’s largest and oldest national museum. Originally located at Yushima Seido Shrine, the museum was moved to its current Ueno Park location a few years after its establishment. The museum has a wide selection of both permanent and temporary exhibitions, mostly themed around Japan.

Ueno Toshogu Shrine, not to be confused with the Toshogu Shrine in Nikko, was built in 1627 in memory of Tokugawa Ieyasu — the founder of the Tokugawa Shogunate. Although not as well-known as the one in Nikko, this shrine is one of the most important Shinto shrines in Japan. The building is adorned by gold trimmings and intricate carvings. Admission to the shrine is free.

Japan’s First Public Museum of Art, the Tokyo Metropolitan Art Museum is host to major art exhibitions every year. Since its founding in 1926, the building was demolished and rebuilt to its current facade in Ueno Park. The museum’s diverse range of exhibitions and art shows are aimed to promote art appreciation and awareness within Tokyo.

A 2-minute walk from Ueno Station on the Ginza, Hibiya or JR Yamanote lines.

Want to take a stroll in a meticulously groomed park under the blue sky? Ueno Park is the perfect location!

Ueno Park in Tokyo takes on a whole new life every autumn, as the peaceful green of the leaves turns to a jamboree of vibrant reds,..

Ueno Park is located in central Tokyo and is home to 1,200 cherry trees that will flourish with pink magical flowers. The 133-..

Ueno Koen is a spacious western-style public park in central Tokyo that features some temples and shrines, a pond, and some more..

Ueno Park Has Got It All, See For Yourself

I often see Ueno Park on Japanese TV whenever cherry blossom season approches. I decided to see what the buzz was all about.

Ueno Park is a large public space located in central Tokyo, and one of the first public parks in Japan.

Ohanami in Ueno Park: Sakura-dori Avenue in Ueno Park provides a glorious scene of a long flower tunnel made of cherry blossoms.

Ueno Park (Ueno Koen) is one of Tokyo's most famous spots for viewing the cherry blossoms during the spring sakura season.

Shinobazu Pond sits in the middle of Ueno Park. This large pond has a circumference of two kilometers and is home to many birds,..

The artistry and horticulture of azalea bonsai is celebrated and promoted at the The Japan Satsuki Association's Satsuki Festival..

Most places in Japan offer tour guides for a reasonable price, but what’s better than no price tag?

Hanami at its best at Ueno Park, Tokyo: Walk around the small lake near the park, eat many delicious Japanese dishes from the various..

Ueno's Shinobazu Pond is home to one of the largest collection of lotus in Japan. The pond is jam-packed with beautiful pi..

The peony garden at Ueno Toshogu Shrine opens for only a month in early spring and welcomes visitors to enjoy the various peon..

Ueno and the Bell of Time

The Bell of Time in Ueno Park was once part of a series of bell towers located around old Edo to help keep time for the citizens...

Hidden in the middle of Tokyo's Ueno Park, this magnificent peony garden is well worth discovering for nature addicts and beauty..

First opened in 1926 as Tokyo Prefectural Art Museum, it was the first public art museum in Japan, generously supported by a large..

The Tokyo Metropolitan Art Museum in Ueno will be exhibiting the works of contemporary Japanese calligraphers from mid-November..

The Tokyo National Museum is the oldest national museum and largest art museum in Japan, is located directly on Ueno Park and goes back to an exhibition..

Ueno Zoo is the oldest zoo in Japan and one of Ueno's greatest attractions. The zoo began as a collection of wild animals affiliated with the National..

The National Museum of Nature and Science is in the northeast corner of Ueno Park in Tokyo. Opened in 1871, it has had several names, including Ministry..

Ameya-Yokocho is an extremely busy street market that runs along the railway line between JR Ueno Station and Okachimachi Station. There are many small..

Yushima Tenmangu, also known as Yushima Tenjin, is a Shinto shrine dedicated to Tenjin, the god of learning. It is conveniently located in Bunkyo City,..

The Nezu Shrine, built in 1705, is one of the oldest Shinto shrines in Tokyo. It is famous for its Azalea Spring Festival, when around 50 species of azaleas..