A modern approach to rescuing cats

Another must-go place for cat lovers opened last December in Osaka. Neko-Hatago is a dormitory-style inn that allows you to fall asleep while 'being watched over' by adorable cats. By doing so, you are actually supporting cats that need foster parents.

Neko-Hatago is a small inn adjacent to the Neko-Yokujo cat cafe. The inn accommodates up to eight people with two sleeping units on the second level, each for a pair of guests, and four separate units on the first level. A group of guests can reserve the entire bedding space and they are free to bring in food and drinks and order Uber Eats deliveries for a a cat-viewing party.

Another benefit for guests of Neko-Hatago is that they can use the shared spaces of Stay Osaka Shinsaibashi, a large hostel located on the second floor of the same building. It has a spacious lounge with comfortable sofas, a large kitchen and shower rooms; many travellers from around the world visit.

Guests receive free tickets for a stay of up to two hours at the cafe, and afterwards, are free to observe the cats from the bedding space behind a glass window. Guests are invited into the cat playing area after the cafe closes to help staff care for the needy felines there.

All the felines in Neko-Yokujo are rescued cats. Some were taken from animal hoarders while others were simply strays who had been abandoned and found before they could be put down. Revenues from the cafe and inn are used to help rescue cats and provide veterinary health checks. Guests meeting the cats here are immediately struck by how well they are looked after; they have fine coats, are full of energy and most enjoy human company. Guests can also become a cat's foster parent after several visits. Along with a staff interview, guest and cat personalities are made sure to match before any fostering can occur. The staff truly love cats.

Neko Yokujo and Neko Hatago are both operated by the pioneering animal welfare company, Neko Republic. The company operates rescue cat cafes in Tokyo, Osaka, Gifu, Aichi, and Hiroshima and its prime goal is to completely eliminate the culling of cats from Japan by February 22, 2022 (February 22 is known as Cat Day in Japan as the number '2' is considered to represent the sound 'nyan', the Japanese way of saying 'meow').

Before Neko Republic, cat cafes with .brand' felines were mostly operated by profit-seeking firms, while rescued cats were in animal shelters operated by non-profit groups existing on donations. “If we rely only on donations, it will become difficult for us to take on a new challenge, and with time and funds limited, staff members could be worn out,” says Neko Republic founder Asaka Kawase. “The most important thing to operate rescue cat cafes is to keep the activity running.”

One of Kawase's key policies is to make her company’s activities fun and fashionable in order to change the image of rescued cats as being 'unclean.' “I myself had thought cats were not so clean and had never stroked cats until my daughter brought home a stray kitten some years ago,” said Naomi Nishikubo, the manager of the Neko Yokujo & Neko Hatago, who has now six cats at her home. "I want people to drop by anyway and know about rescue cats and how charming they are."

The interior design of the buildings is modern, colourful and upbeat. Neko Yukojo has a traditional bath house theme with Mt. Fuji illustrated on the wall; the idea being that guests can relax by 'soaking in cats' just as if they could by relaxing in a hot spring. Neko Hatago resembles Edo period lodgings with the wallpaper featuring cat patterns as drawn by the famous ukiyo-e artist, Utagawa Kuniyoshi.

A 1-minute walk from the No.6 Exit of Nagahori-bashi Station on the Osaka Metro Line. 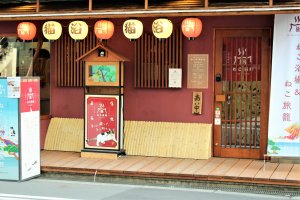 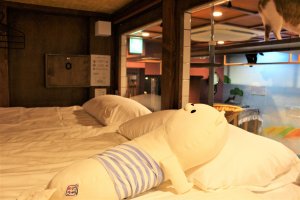 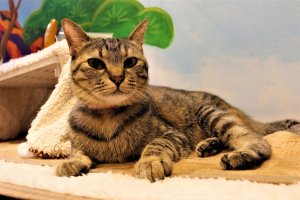 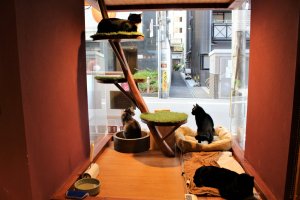 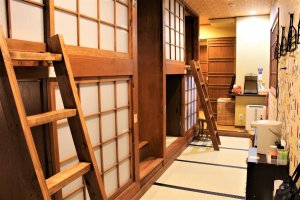 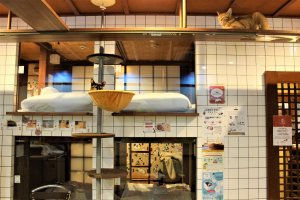 Elizabeth S 2 years ago
Don't let anybody tell you cats are aloof. A cat in a suburb of Tokyo adopted me. She was great company, very affectionate, and was great company. She was fastidiously clean, too. She's since passed away (she was elderly when I met her), but what a wonderful couple of years I had with the neighborhood cat.
Reply Show all 1 replies

Shinobu Ishikawa Author 2 years ago
Elizabeth -san, you must have had great days with her. Cats are such wonderful friends and companions. They are sometimes funny but other times graceful. I believe they are one of the greatest creation of God.
Reply

Sleiman Azizi 2 years ago
Their ability to be proactive about how they go about achieveing their goals is impressive.
Reply Show all 2 replies

Shinobu Ishikawa Author 2 years ago
It is. The founder, Kawase-san, is quite determined to achieve the "no cat-culling" goal by the cat day in 2022.
Reply

Sleiman Azizi 2 years ago
Rightly or wrongly, animal shelters have a pitiful image. It's interesting to see someone trying to change that image through commerce.
Reply

Sherilyn Siy 2 years ago
Looks like both cat and a cat-lover's haven.
Reply Show all 1 replies

Elena Lisina 2 years ago
Great place for the lovers of cats! I won't mind to stay there particularly if cats are friendly. :)
Reply Show all 2 replies

Shinobu Ishikawa Author 2 years ago
Several are shy but most of them are very friendly.....and so "kawaii"!
Reply

Kim 2 years ago
This is adorable, and I love that the cats are all rescues. Nice to see the proceeds going to their care and wellbeing! :)
Reply Show all 1 replies

Shinobu Ishikawa Author 2 years ago
Yeah, I hope more people choose a rescue cat cafe, rather than a profit-seeking one.
Reply
12 comments in total