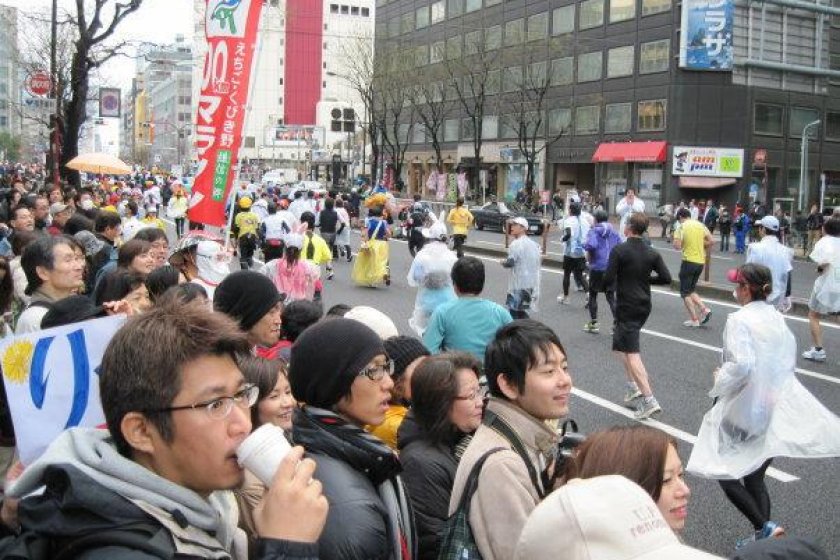 Tips for watching and cheering at the big race

Let the entertainment come to you!

The Tokyo Marathon has a well-earned reputation in the running world as an event with great spectators, and up to 2 million of them show up each year to cheer on the runners. As one of the six World Marathon Majors (with Berlin, London, Boston, Chicago, and New York City), that's a big deal. But with a course spread out over 42.195 kilometers, watching the race takes a bit more planning and effort than your average sporting event. Luckily, Tokyo's fantastic train and subway system make it easy to move throughout the course (see below for a list of station on the marathon route). This is a guide to the Tokyo Marathon for spectators, based on two years running in the event, and another few watching. (If your friend is running, send them to this article's companion piece: Tokyo Marathon - Runner's Guide)

The starting line is one of the great spectacles of this event, and my personal favorite. Outside the Tokyo Metropolitan Government Building, it is an explosion of energy and enthusiasm, the glorious payoff after months and months of grueling training. The entire mob of people becomes a single living thing pouring down the street together, with confetti floating down and music playing. If the Opening Ceremonies of the Olympics gives you chills, then this is for you. If you're here to cheer for friends in the race, be sure to a) check the letter on their bib number to find out what starting group they are in, and b) make arrangements beforehand to be on either the left or ride side. With 36,000 people flowing by, it's hard to pick someone out of the crowd, and the street is wide here. There are some grandstand seats if you get there early enough, and plenty of standing room.

There are also plenty of good spots to watch along Yasukuni Dori, just a block away from the Kabukicho Exit (East Exit) of Shinjuku Station. There is plenty of entertainment there too, and I remember marching bands and cheerleading squads performing as I ran through here.

The next spot to consider is the gardens around the Imperial Palace, which at about the 9 km point are just a short walk from JR Tokyo Station, as well as several subway stations. It's a long straightaway and the road narrows a bit here, making it easy to pick people out of the crowd. Also, this is the last chance to see participants in the 10-kilometer race, as that finish line comes up shortly after this.

From 10-km to the halfway point

After exiting Hibiya Park, the course turns south onto the first "hairpin" down-and-back (see the course map). Crowds here remain thick and enthusiastic, particularly at the turnaround point near Shinagawa Station. There is an excellent photo opportunity at about the 19-km point to get photos of the runners with Tokyo Tower looming in the background (which is the same spot on the course as about the 12-km point, but since at 19-km you're running on the opposite side of the road, it's easier to get photos there). There are a lot of smaller entertainment points through here, with smaller stages set up for musicians and performers.

A very good place to watch from is near the halfway point, which falls in the area where runners turn east after finishing the first hairpin. This is the Ginza area, which is a very modern, elegant part of Tokyo with many beautiful buildings as a photo backdrop. Psychologically, reaching the halfway point is a big boost for the runners, and the large, enthusiastic crowd around here is a huge pick-me-up. I remember spotting my friends here when I ran this course, and thinking that it was a perfect placement for some support.

Halfway point through the second hairpin

After Ginza, the course turns northward towards Asakusa for the second down-and-back hairpin. Crowds remain steady but unspectacular on the way north, with most fans opting for a spot near Asakusa, which is a point of marathon entertainment. Asakusa is a major tourist area with some incredible temples and sights. Near the entrance of the famous Senso-ji Temple is a stage set up with excellent traditional performances throughout the event, from dancers to taiko drummers to costumed actors. There are big, big crowds here and a very lively atmosphere. There are also several higher-floor cafes and restaurants in the area with big windows overlooking the route.

The south-bound half of the hairpin, however, is what I have come to think of as the "Dead Zone." Frankly, this area is devoid of everything - no interesting sights, no entertainment, and almost no spectators. For the casual fan, this is no place to be. However, for those who are cheering on a friend, this might be a great place to be, since this tends to be the point in the race that many runners "hit the wall," meaning, they start to mentally and physically crash in a big way, and could use some support.

After finishing the second hairpin and turning east, the crowds pick back up as the course passes by some fairly big areas with notable landmarks like the Kabuki-za Theater and Tsukiji, home of the famous Tsukiji Fish Market.

After that busy area, the course heads over several bridges in a stretch that is difficult and not well-suited for spectators, as there is little area on the sides of the road and it is somewhat difficult to access. Following the bridges eventually deposit runners onto the man-made island of Odaiba, which is the final homestretch of the race. As the runners snake through Odaiba's streets, there is plenty of space for spectators, and this is quite a popular area for people to watch from. Runners are very much in need of some final encouragement to finish the event as their bodies and mental states break down. The course here is littered with participants walking and stopped due to fatigue and injury, and the shouts from the sides are a big help. It's also a strategic spot to watch from, since the actual finish line itself has limited spaces for the audience and can be difficult to get into.

The race finishes at the Tokyo Big Sight convention center. There is a final straightaway to the glory of the finish line, with some grandstand seating on the side. However, the seating is very full, and spectators cannot count on getting a seat there at the last minute. If you really want a photo of the end, get there long before your friend is.

After runners cross the finish line they have a lot to do, from collecting their medal to finding their belongings to changing (and that's not counting time spent collapsed on the ground). After all that, they will finally emerge into the "Family Reception Area" of Tokyo Big Sight, where you can go to greet them. In other words, don't rush there. However, it's a true mob scene inside, so it's best for you and the runner to both have cell phones, or to designate a meeting spot beforehand. Before you leave, head downstairs in Big Sight to find a big sponsor board where you can pose for photos. Additionally, there is always a major traffic flow problem here, with many entrances being filtered only through one exit, and it can take forever to file out.

Outside Big Sight there is a small festival with food vendors, singing groups, tourist information, and various entertainment sources. While there are some restaurants and places nearby, they are likely to be overcrowded, and it's best to celebrate elsewhere. From Tokyo Big Sight, you can access the Yurikamome Train Line from Kokusai-Tenjijo-Seimon Station (3 minutes' walk) or the JR Rinkai Line from Kokusai-Tenjijo Station (7 minutes' walk).

-The official Tokyo Marathon website has constantly-updating data to tell you a runner's given location on the course. Be sure to get your friend's bib number beforehand, and you'll be able to see the exact time they cross each checkpoint. It's a great way to plan your move from Spot A to Spot B.

-Dress warmly! The average February temperature for Tokyo over the past decade is 7°C/44.6°F. That said, don't forget your sunblock too. What starts off as cold winter mornings can turn into bright, sunny afternoons.

-Make yourself noticeable. Marathon runners are famous for donning crazy costumes, but spectators do too. In fact, at a race of this size (did I mention that 36,000 people are running and 2 million are watching?), even vigilant spectators can let their friend run right past without noticing them. When I ran in this event, I recall one audience member who wore a hat with a big, red arrow mounted on top pointing down at himself. I don't know who he was, but I definitely noticed him 4 or 5 times throughout the race as he moved closer and closer to the finish line.

-Be sure to check out the Tokyo Marathon Expo, held from Thursday to Saturday before race day. The event is open to the public, and is the best source of specific info for the marathon around, as well as a good place to buy the latest running gear.

-Good luck, and have fun! Any questions can be asked in the comments section. 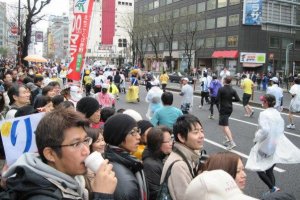 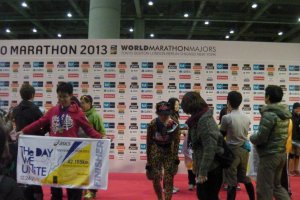 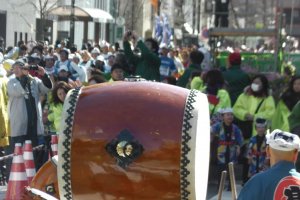 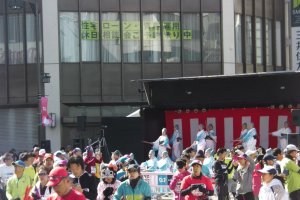 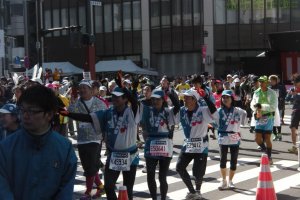 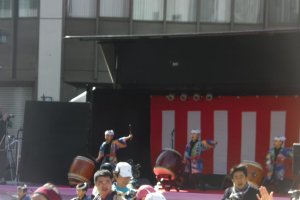