The Ten Shrines of Tokyo

Discovering the sacred side of the capital

When compared to Kyoto, known for its tradition and history, where travelers have plenty of famous shrines and temples to choose from, Tokyo is known for it’s modernity, for its architecture or pop culture. Despite this contrast, Tokyo is actually home to many shrines, maybe lesser known, but showing a different side to the capital. I invite you today to discover the Tokyo Ten Shrine Course.

In 1868, after the Meiji restoration and the return of power in the hands of the Emperor, he moved from the ancient capital of Kyoto to Edo Castle, now a part of the Tokyo Imperial Palace. On his arrival, he gave special status to twelve shrines where prayers were offered for the renewal and prosperity of the capital. With their location all around the city, some people viewed these shrines as a barrier protecting the Emperor’s residence.

Gradually, this group or course of shrines were forgotten with some of them being destroyed during the firebombing of Tokyo in World War II. However, in 1975, to celebrate the 50th anniversary of the reign of Emperor Showa, the shrine course was renewed, though limited now to the ten shrines within the twenty-three wards that make up Tokyo. Today, the shrines are visited by many people, with some giving these locations special attributes, known as a power spot. In other words, locations that emanate a special energy.

Whether for spiritual or tourist reasons, no matter what brings you to complete this course, one thing is for sure, you will discover a side of the city that is less known. To commemorate your trip, you can get a stamp book (goshuincho) with the colors of the course. It is available in two versions, one with a wooden cover and the other with a purple fabric cover at 1200 JPY. Stamps (shuin) are between 300 JPY and 500 JPY depending on the shrine. In some cases, the shuin might be pre-printed, especially during festivals and in some shrines, you will also get a charm. You can also get a giant ema plaque for 2000 JPY on which you can place mini-ema for each temple at 300 JPY each.

The ten shrines of the course

It is possible to complete the course in a single day, but this would require a lot of organization and no detours, so it is highly recommended that you take several days to enjoy the different neighborhoods of Tokyo. To see the location of each shrines, you can see the full map on the official website. Here are the ten shrines and basic information about them:

Located near Ochanomizu Station, the shrine hosts the Kanda Matsuri, one of the three big Edo festivals. The shrine is dedicated to two of the seven gods of luck; Daikokuten and Ebisu, gods of commerce, prosperity and wealth and so popular with businessman, especially on the start of the new year. It is also close to Akihabara, convenient and popular with otaku fans of mange, anime and technology.

Located near Akasaka Station, the shrine hosts the Sannō Matsuri, one of the thee big Edo festivals. It is particularly popular with people who wish to have a happy wedded life, for the well-being of kids and easy childbirth. It is not surprising then to know that it is also popular with ceremonies such as weddings, miyamairi and shichi-go-san.

Located near Monsen-nakacho Station, the shrine hosts the Fukagawa Hachiman Matsuri, one of the three big Edo festivals. It is known as the birthplace of sumo and ceremonies are held at the shrine whenever a sumo wrestler achieves the rank of highest rank of yokozuna.

Located near Nezu Station, the shrine is known for its rhododendron flowers at the center of the Tsutsuji Matsuri that takes place during the blooming season. You can see the richly decorated gongen-style architecture even if it it less flamboyant than the Nikkō Tōshō-gū that shares the same style. Another nice feature is the torii gates that lead to the Otome Inari-jinja right next to Nezu-jinja.

Located near Kameido Station, the shrine is known for its wisteria, the center of the Fuji Matsuri held during the blooming season. Like any shrine dedicated to Tenjin, it is also known for its plum blossoms and is popular with students who are looking for success in their studies. In front of the shrine there is a pond that is home to many turtles (kame) and crossed by two red bridges that have a nice round shape, while the Tokyo Sky Tree is sitting in the background behind the shrine.

Located near Hakusan Station, it is known for its hydrangea, the center of the Ajisai Matsuri during the blooming season.

Located near Daimon Station, this shrine is easy to miss in the neighborhood thanks to the presence of the impressive Zōjō-ji temple and Tokyo Tower on one side and Kyū Shiba Rikyū and Hamarikyu gardens on the other side.

Located near Shinagawa Station, this shrine has many unique features such as a climbable 15 meter-tall fujizuka, or Mount Fuji replica. It is also the shrine dedicated to Daikokuten in the Tōkai Shichifukujin course.

Located near Ōji Station, a 600-year old ginkgo tree stands in the shrine’s ground. It's known for an annual festival where you can see dengaku dance performances. It is a popular shrine for newlyweds and for pregnant women.

Located near Roppongi-Itchome, this shrine and its greenery contrast with the bustling Roppongi neighborhood that is next door. It hosts an important community festival in September, the Akasaka Hikawa Matsuri. 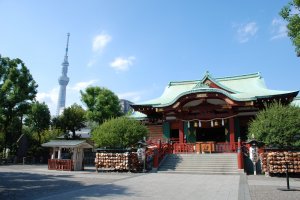 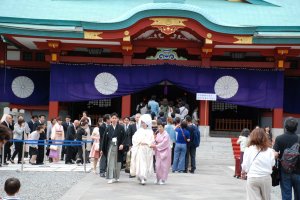 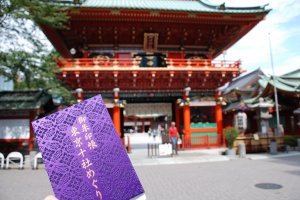 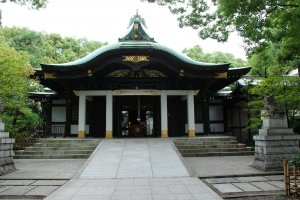 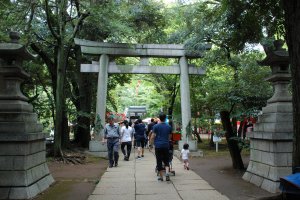 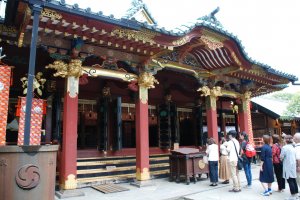 Elena Lisina 10 months ago
I didn't see most of them!
Reply Show all 2 replies

Guillaume Doré Author 10 months ago
I realized that I linked your article on the fuji matsuri, that is a nice shrine.
I personally had only visited 4 before doing this course.
Reply

Elena Lisina 10 months ago
Yes, thank you you! Kameido jinja is rather small area ad on the day of my visit it was SO crowded! It was Golden Week!
Reply

Kim B 10 months ago
This would be an interesting way to see some of Tokyo’s shrines.
Reply Show all 2 replies

Guillaume Doré Author 10 months ago
It's actually a nice way to see the city, not only the shrines. I did similar course in other cities like Kyoto and Osaka and it bring you to less touristic and sometime wonderful places.
Reply

Kim B 10 months ago
That's very true. Even after living in Tokyo for several years I haven't seen a number of the shrines on this list. I'll have to try and check them out next time I'm there.
Reply
6 comments in total